What's on your mind?

When Jacob Phelps (alias Tom Keen) in season 3, Ep.3 'Eli Matchett offered his help to Agent Donald Ressler, and was rebuffed, i wish Tom had beaten the 'STEW' OUT OF THAT 'Self-Righteous' Idgit.

ands Agent Navabi, at times, could also get on my nerves.

A kidnapping poses a test for the capabilities of the task force as they contend with a mysterious pirating organization.

In the two years following Elizabeth Keen's death, Reddington and the task force have disbanded, with Red's whereabouts unknown; but when one of their own is injured in the line of duty, they are drawn back together to bring down a global.

What are your thoughts on the episode? What did you think of it?

Unfortunately, not every plot from this hit TV series hits the screen. If you are a real fan of the show, you can tell and spot some of these story gulfs and underemphasized storylines throughout the seasons of the TV-series. 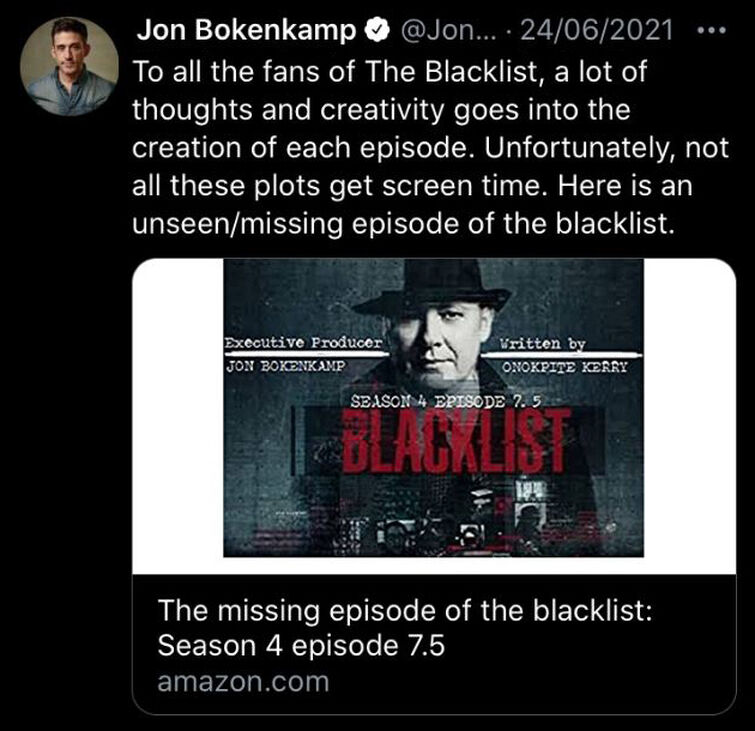 Here is one of such episodes that didn’t get screentime and it is available on Amazon for your reading pleasure. Perhaps, this will give you the needed insight to unraveling the long-lasting mystery of the show.

I think I know Reddington's real identity, how about you? Don't want to spoil it.

Whenever I try to make some changes in a page he always re change it to the previous one. If that the case then disable the edit option.

First, while the overall writing and production quality has been lacking lately, I'm re-interested in the plot line again, knowing that the end of the series was already written when the first season began, and that only Bokenkamp, Spader, and mere handful of other cast members actually know who Reddington is going to end up having been. My strongest impression is that:

Another relatively easy assumption is that - based on established access to both facial changes as well as DNA and genetic exchange:

2. A DNA analysis of anything in previous episodes (whether that be Keen, Red, or the bones of Reddington) are really arbitrary.

3. Increasingly I'm assuming Keen's personal memories as she recalls them are relatively arbitrary, as well.

I'm still working out how Katarina didn't initially know that Ilya was NOT our Reddington. However, Red's clearly deep and abiding friendship with both Ilya as well as Stepanov does imply he is (originally) Russian.

Also, it is becoming increasingly clear that--as many previously suspected--Elizabeth is indeed the ultimate asset that must be protected.

Any other new speculations since S8:E17?

S8:E14 Was a very unsatisfying experience. I may have reached the point of ending watching this overdrawn-out mess because this disaster of a narrative continues to result in such poorly written scripts. S8:E14 could have been an excellent and exciting follow-up to S8:E13 but what I watched is called "filler episodes" which showrunners use to add to the catalog without doing much but editing in the studio. After 8 years it's way past the time that the producers of this show make a stand with where they are going with Raymond and Elizabeth. They have long ago jumped the shark.

So at the end of the last episode we see that guy who works with Red and Rakitin giving Red an order to eliminate Cooper so it's a possibility that Cooper dies next episode and Ressler replace him. Maybe then Ressler meets with Keen and makes her a deal for imunity if they work toghether to stop N-13(Red).

I'm trying to find the name of a minor character on The Blacklist and have utterly failed to find the right search terms. I'm also trying to avoid spoilers for season 8, so that makes the searching extra fun. There was an episode where Red mentioned having, early in his criminal career, had someone he wanted to get power over. He created a situation in which the adult child of that person was in danger, intending to resolve it and put the parent of said child in his debt. But something went wrong and the child - I think it was a son - was killed. I don't remember if the parent was a blacklister or if Reddington had some reason to see him - I think it was a him - or if he was just mentioned in passing. If anyone has that info, I would really appreciate it!

My name is Chris, a Fandom Wiki Representative working with this community.

Today I have an exciting project to share - Fandom announced in a blog that it would be devoting two weeks on a quality of life project - a two-week bug squashing effort!

So my question to you is - are there any bugs that have been really annoying on Fandom that you would like fixed? These can be big bugs or small bugs - any report is appreciated!

Please include below the following to help us work on these issues:

The more information you can provide, the more we can pass on to engineers who can tackle the problem. Even if it seems obvious detail, it will make it much faster to fix these bugs. The project will run for 2 weeks, so the faster we can know about your issue, the more time there is to get it fixed.

Please post bug reports below or alternatively, my message wall or Discord at Spongebob456#7402 are always open. Thanks! :)

Ok so when Dom said that Red and Katarina both have archive my first thought is that Liz is actually N-13 and is a sleeper agent or that Liz has the archive and she doesn't know, but what if Red has plan this all along:

-Red has created the blacklist but we don't know why

- Red has gave to Liz his empire in his will.

It's only a theory and anything can be possible.

And sorry for my bad english.

I searched for a long time for some good quizzes about The Blacklist and it's always too easy to solve or there are just a few questions. So I made my own quiz - to solve this, you must really be into the show and tracking details. If you guys like it I will upgrade it even more, but please try it and let me know what you think about it.

Sorry, idk if there's an off topic post. If there is please let me know and delete this.

Just wanted to let everyone who loves Buffy and Angel that a new discussions board has been made to discuss them. Brand new, barely any posts, check it out pls: https://buffy.fandom.com/f

Discuss Everything About Buffyverse Wiki | Fandombuffy.fandom.com

I'm not sure if anybody else has said this, but I feel like Liz is the Sikorsky Archive. Maybe the government or somebody stored the information in Liz (idk: maybe in her DNA or her memory). This would explain why Dom and Reddington (whoever he is) will not tell anybody the truth.

I don't really know if N-13 is actually Reddington because Dom was acting delusional, but I think that he is truly protecting Liz. I'm not sure what reason he would need to kill Katarina after she found out, because she would just protect Liz also, so this theory might not pan out.

I would just like to congratulate the producers and creators for a fabulous show. The casting of James Spader as Reddington is spot-on! His alternative ways, awesome use of words and appropriately chosen silences make me wonder how much of the character is true to James Spader's own personality. His self proclaimed strong OCD tendencies and apparent similarities to the character makes the portrayal of this character even more real.

Particularly season 3 episode 19 and especially episode 20, stand out. The raw emotion and love for Elizabeth and Katarina quite literally jumped off the screen. I could feel it resonating in my soul and enter a place where I could not bring myself to identify the emotions I was feeling. The hope that one day someone...might miss me enough to show grief in such a way. Someone might be so sad that they would imagine me... dream of me...mourn decisions made...in such a way that I felt myself sitting on that beach and hoping for some strong loving arms to save me. As much as I would love to convey this awe and appreciation to James Spader myself for his portrayal...I know that this would be a far cry from my reality. Please convey my message to an awesome actor and tell him that I have imagined his arms around me many times!

The use of Gordon Lightfoot's music is phenomenal! What a treasure!

Help us grow The Blacklist Wiki