Edit
watch 01:37
Who is Alan Fitch?
Do you like this video?
Play Sound

Killed by a pipe bomb rigged by Milos Kirchoff

Office of the Director of National Intelligence

Alan Fitch is the chairman of the Cabal and member of The Blacklist.

Publicly, Alan Fitch worked as the Assistant Director of National Intelligence. Fitch had been married to a woman named Margaret for 51 years. On the side, he was a senior member of the Cabal, a criminal syndicate whose secrets Raymond Reddington knows. During the Cold War, he was known as “The Decembrist” and was apparently a major figure in the world of espionage that operated extensively to end the Soviet Union communist regime. For that end, In 1990, Fitch orchestrated the bombing of a Soviet Union meeting aligned with the communist regime in Kursk, killing 15 people. Also in 1990, Fitch framed a US naval intelligence officer named Reddington of treason by leaking classified U.S military documents that led to the destruction and sinking of an American submarine called the USS Gideon, killing 134 people. He did that to kill and/or discredit Reddington before he released damaging information on the Cabal, known as the Fulcrum. Red has arranged for those secrets to be divulged in the event of his death in order to make sure Fitch's organization stays away from him. Fitch was the one responsible for Berlin's daughter's disappearance, having helped her escape from a gulag and fake her death.

Fitch arranged for Anslo Garrick to attack the Post Office and capture Red so that he could interrogate him as to whether Red's new arrangement with the FBI affected their previous agreement. He decided that Red had not betrayed his Cabal after all. He forbade Garrick from killing Red, fearing that doing so would release the evidence against him and his cohorts.

He questions Diane Fowler about the recent attack on the Post Office during a meeting at the Office of the Director of National Intelligence (ODNI). He states that Fowler must give him something to use when he testifies before a United States Congress Senate subcommittee.

Fitch meets with Red, who demands aid in dealing with the attacks on his syndicate. Fitch later meets with Red and tells him that the members of the Cabal will not come to Red's aid. Some fear Red more than the Cabal, others believe Red's evidence is a bluff. Fitch's first name is revealed to be Alan.

He aided Red in the hunt for Milos Kirchoff. He said that Red was more dangerous than the Cabal. Fitch stated that he was risking his position by aiding Red. However, Walter Gary Martin gave Harold Cooper an indirect reference to Fitch in retaliation for Red's staged escape.

Fitch is exposed as the one responsible for the feud between Reddington and Kirchoff when he turns out to have orchestrated both the bombing of a meeting between Soviet officials near the end of the Cold War, with Kirchoff among the victims (having paid a then low-level KGB operative named Kiryl Morozov to do it), and the disappearance and staged death of Kirchoff's daughter. He is later kidnapped by Kirchoff's men and rigged with a pipe bomb stuck to his neck on Kirchoff's orders. Before it goes off, he warns Reddington that the organization he works for will react badly to his death and several members doubt that Red still has the Fulcrum. Fitch tells Red of 2 members who could be persuaded to align with Red's agenda. The other members will lose control and move forward without planning for any type of failure. He gives Reddington the combination to a safe somewhere in St. Petersburg that contains something useful, but the bomb explodes before he can say exactly where. The conversation also suggests that the organization has something planned for 2017.

Later on, after Red and Kirchoff drink a bottle of vodka, Red shoots Kirchoff to death, avenging the deaths of Meera Malik and Fitch.

Alan Fitch is heard on a tape ordering Katarina Rostova to frame Red for treason. 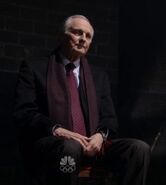