The Blacklist Wiki
Register
Don't have an account?
Sign In
Advertisement
in: Season 1 Cast, Season 2 Cast, Season 3 Cast,
and 4 more

Amir was born on March 24, 1978 in St. Louis, Missouri, and is of Israeli descent. Amir attended and graduated from Columbia University in New York City.

Amir began his acting career with theater productions such as “Omnium Gatherum” and “Modern Orthodox” and the off-Broadway production of Aftermath. Amir was part of the Sunshine Series, an annual play reading festival, in 2009.

Amir began his career onscreen in 2004 with a role in an episode of The Jury, a legal drama following a different jury's deliberations on a criminal case each episode, playing the character Tariq Ahmed. Since then, he has appeared in TV shows such as NCIS, Fringe, Homeland, American Horror Story: Murder House, The Mentalist and Zero Hour, among others.

Amir has appeared numerous times in the Law & Order franchise, most notably in Special Victims Unit as Dr. Manning in nine different episodes. He currently holds a starring role in NBC's The Blacklist. 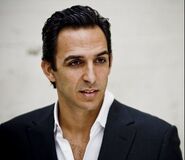