"Anna-Gracia Duerte" is the seventeenth episode of Season 5 of The Blacklist and the hundred and sixth episode overall.

When an associate of the Nash Syndicate is murdered, Red sets Liz and the Task Force on the case in order to recover evidence crucial to bringing down Ian Garvey. Meanwhile, Aram considers a step forward in his relationship with Samar. 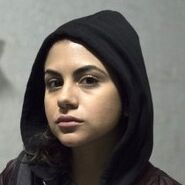 Anna
Add a photo to this gallery

Retrieved from "https://the-blacklist.fandom.com/wiki/Anna-Gracia_Duerte?oldid=41744"
Community content is available under CC-BY-SA unless otherwise noted.