Anna McMahon was a member of The Blacklist.

Anna McMahon was the Assistant United States Attorney General and a presidential advisor to Robert Diaz. Anna, alongside Diaz, is orchestrating an international conspiracy against the United States of America.

Anna is appointed the new liaison with the Post Office.

Anna is revealed to have used the Third Estate to distract the task force.

Following the failed assassination of Miriam Diaz and the Task Force, Anna holds Raymond Reddington at gunpoint and refuses to surrender despite the Task Force having her outnumbered and outgunned. Anna insists that they were trying to save the nation-state, not destroy it and intends to kill Reddington even if it costs her life. Before she can fire, Anna is suddenly shot through the head and killed by Dembe Zuma. 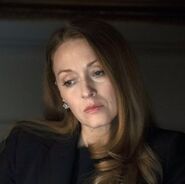