Raymond Reddington is celebrating with some associates (including Luli Zeng and Max Ruddiger) in a bierkeller in Munich, Germany when he sees Donald Ressler arriving. Red greets Ressler and introduces him to his companions as “my man in the state department”. Ressler tells Red that Elizabeth Keen needs him because she has been detained. When Red asks why Ressler tells him that it is above his security clearance, and that his job is to locate Red.

Liz is at home sorting through her father's possessions when she finds a slightly burnt stuffed toy rabbit which triggers a flashback to a house fire, which causes her to cry. Tom Keen consoles her.

Upon arrival at the Post Office, Ressler tells Red that Liz is fine and he is being taken into protective custody. Luli and Dembe Zuma are separated from Red and led in a different direction while Red is taken to see Harold Cooper.

Cooper and Meera Malik explain to Red that an imminent threat has been made on his life. When Ressler mentions Anslo Garrick, Red says that the information has been fed directly to them, to make them react they way they have, so that Red would be in a location they knew in time to plan an assault. He says that the only way this could have occurred is if there was an informant in their team and he is saying no more until he determines who it is. Red says that Garrick specializes in extracting people from black sites. He cites a previous raid on a CIA site that was blamed on Shining Path, a communist guerrilla insurgent organization.

While this discussion is taking place Garrick's team have arrived using the garbage truck for transport. They begin their assault on the Post Office, simultaneously Liz has arrived for work and entered the elevator/lift. Garrick's team kills the exterior guards, places jamming units to severe the communication systems, and cuts the power lines.

When the power is cut Red states “They're in”.

As Ressler takes Red to the box, Cooper orders all unarmed and non-essential personnel to evacuate the building while he leads a team to the armory where they will make their stand. Cooper orders the destruction of the computer hard drives and any other electronic systems that contain information. The remaining FBI guards are overwhelmed while failing to inflict serious losses on Garrick's team.

On the way to the box, Ressler is shot in the leg by one of Garrick's men, but Red grabs Ressler's gun and kills him. Dragging Ressler with him, with a stop for medical supplies Red reaches the box and locks himself and Ressler inside just before Garrick and the rest of his men arrive.

In the armory, Cooper tells Aram Mojtabai to try and re-establish communications to the outside world. Aram leaves to find the jammers.

Liz realizes that something is wrong and climbs out the elevator car and shaft. Once out of the elevator Liz finds some dead security guards and a radio. She contacts Cooper, and is updated on the situation.

While Red tends to Ressler's wound Garrick taunts him about a failed assassination attempt led by Ressler. Red in return taunts Garrick about his wounds from where Red shot him.

Liz and Aram team up and go to find and destroy the jammers, while Red gives Ressler an emergency blood transfusion. Red reveals that he knew about Ressler's assassination attempt. To keep Ressler awake Red asks him about his former fiance, Audrey Bidwell. Ressler says that she left him, due to his obsession with catching Red for the past five years. Red then waxes lyrically about all the things he still wants to do, and says that is why he will beat Garrick.

Liz and Aram find and destroy the first of the jammers.

Garrick threatens to shoot Cooper unless he opens the box, but Red talks him out of it.

Liz and Aram destroy another jammer, then decide to split up as that will allow communications to be re-established quicker.

In an effort to convince Red to open the box, Garrick puts a gun to Luli's head. When Red does not open the box Garick kills her.

Just as she finds another jammer Liz is captured by one of Garrick's men.

Garrick then puts a gun to Dembe's head. Dembe tells Red that theirs is a friendship forged in this world and the next. Red realises that Ressler knows the code, but he has fainted through pain. Red and Dembe then recite Al-Ikhlas together and the screen goes black as a gunshot is heard.

THE FBI BLACK SITE COMES UNDER SIEGE - Donald Ressler attempts to protect Red from a possible assassination attempt but is misled. The newest member on the blacklist, Anslo Garrick, infiltrates the FBI black site and tries to capture Red. Meanwhile Liz gets caught in an elevator and tries to figure out what is going on. 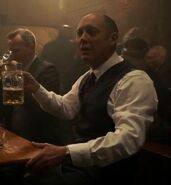 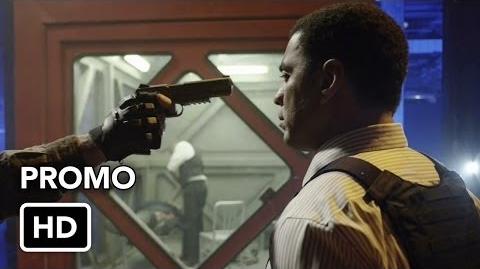