The Blacklist Wiki
Register
Don't have an account?
Sign In
Advertisement
in: FBI Agents, Season 1 Characters, Season 2 Characters,
and 11 more

View source
watch 01:23
Who is Aram Mojtabai?
Do you like this video?
Play Sound

Aram Mojtabai is a main character in the NBC series The Blacklist.

Aram was born in Delaware.

He worked for the NSA for 14 years before being hired by Harold Cooper for his diverse skill set.

When Elizabeth Keen and Raymond Reddington enter Wujing's headquarters, Aram intercepts the background check on Liz and ensures that she has no ties with the government. He also monitors their transceivers and tells Donald Ressler and Meera Malik when the connection is lost. He reports that Liz has managed to upload Jin Sun's computer in time to prevent the raid on Wujing's base. He tells Meera and Ressler that Henry Cho is the target of Wujing's assassins.

He traces the Shubie Hartwell alias being used by Gina Zanetakos to a hotel in Washington DC. He hacks Gina's phone and retrieves her conversation with Max Ruddiger and her home address.

He retrieves the image of Frederick Barnes from the subway CCTV footage that shows him entering with his briefcase and leaving without it.

He tracks the van containing the money and relays the information to Elizabeth Keen and Donald Ressler.

Harold Cooper orders Aram to work on re-establishing communications with the outside world, when he realizes that the site is under attack.

Aram works out how to re-establish the communications once the jammers are removed. He goes with Liz to locate and destroy them, even though he has “only shot at paper”.

After Liz's capture he manages to locate and destroy enough of the jammers so that communications with the outside world can be re-established. When faced by one of Garrick's men ordering him to surrender or Liz will be shot, Aram kills him. He is so stunned by the act of killing a man that he and Liz are easily captured by more of Garrick's men.

Once the Post Office has been recaptured he analyzes the FBI's communication logs and discovers that somebody has been using “burner” cell phones to call the people monitoring the Keen house.

Aram is framed for being the mole to both the FBI and Raymond Reddington. Red has him brought to him and orders Aram to perform an untraceable 5,000,000 dollars money transfer in the time it takes Red to strip, clean, and reassemble a gun. When he is successful Red declares him innocent, since if he were guilty he would never have used an easily traceable method, when he could have so easily covered his tracks. Red releases him and he returns to the Post Office, where he is arrested by Cooper's men. He gives Cooper Red's proof that Newton Phillips was the mole.

Once the team bring Pytor Madrcyzk back from Budapest, Aram coordinates the improved DNA testing on the bodies from the crash site. He identifies the woman initially thought to be Catherine Madrcyzk as Sarah Jenkins, and gets a warrant for records of the online dating site she accessed.

After the raid on Eric Trettel's laboratory he is puts the pictures of Trettel's victims on the display screen. Liz realizes that one of the women looks like Molly Trettel.

From Tettel's computer he manages to retrieve a list of Trettel's clients, which he gives to Liz.

Aram reports that he has found a hidden area on Caldwell's computer. The area contains several files including one with the details of a Georgetown University student named Charlotte Patterson. Based on the style of the file it appears to Aram that Charlotte is a prospective kidnapping victim.

He attempts to trace the location of the skeleton key and track down Harrison Lee.

He uncovers an overall view of the accounts being used to pay the relatives of the assassins.

He uses Red's information to find the Kingmaker by reviewing the airline records.

He attempts to contact Donald Ressler and Meera Malik at the club, but is unable to get hold of either of them.

He reveals that he has been following the urban legend of Lord Baltimore on the internet forums.

Aram states that he needs Liz to personally access Linus Creel's computer so he can get the password.

Aram and Samar Navabi are in the surveillance van during Agent Keen's undercover interaction with Dr. Creel. When Keen starts talking about her troubled past (to get Creel's interest), Navabi bets Aram 100 dollars that she's actually telling Creel about real events in her life. Aram tells her, “No way,” and she ups the bet to 200 dollars, which he accepts and they shake on it. Later, when Navabi gives Keen the file that Creel had on her, she puts it away without even looking at it, arousing Navabi's suspicions that she actually did live through the events she described to Creel. Regardless, Navabi says that she was wrong and gives Aram his 200 dollars. He tells her that he plans on enjoying a nice seafood dinner with his winnings, and invites Navabi to join him, saying he's buying.

Afraid that Glen Carter won't be able to find someone he's looking for, Reddington tries to get Aram to find her instead.

Aram is present when Cooper is negotiating with Luther Braxton for the lives of the FBI agents and prison staff held captive in The Factory, a CIA prison for the most dangerous criminals in US custody. When Braxton demands the all-access administration code for the facility's mainframe in exchange for Samar Navabi's life, both Cooper and Kat Goodson are hesitant. Aram adamantly insists they give him the code. This, along with his nervousness around her in the past, further hints that Aram has developed a “crush” on Navabi. When they agree to give up the code after Navabi is almost suffocated to death, he is evidently relieved.

“Kings of the Highway”

Agent Navabi had asked Aram not to disclose the information that was searched on Ressler's computer, claiming that she had made a search to assist Liz in finding Reddington. Aram tells him regardless, allowing the task force to find Liz. He discloses later that he knew that she had lied to him, as he saw the IP address of the search, placing her at Ressler`s house.

Aram consoles with Liz about no longer working on the field.

He uses the most recent, cufflink wire to listen in on the Shell Island meeting, where they discover where the hostage was being held before the wire was destroyed.

Aram sends Liz “trashy” novels as a gift for her recovery.

It is revealed that Aram was the one who wrote the recommendation that Agent Navabi be allowed back under Ressler's name. As he begins to leave for the night, he sees Cooper in his office, where he has been sleeping after separating from his wife, and offers to keep him company.

Aram watches the confrontation of the 2 families over a camera.

Aram finds that Noah had discovered Agent Keen's whereabouts and was coming for the child. He also tracks down the list of people who purchased the carnivorous butterflies being used.

Aram states that the cipher machine cannot be cracked using a supercomputer. 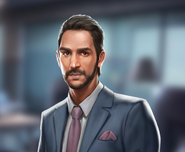 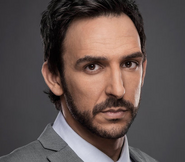 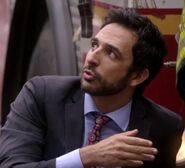