The episode opens with a man (Paul Blankenship) coughing up blood. His wife (Amanda Blankenship) tries to kiss him, but he avoids her saying he doesn’t want her to get what he has and then heads off to work. He’s an armored truck worker continues coughing up blood, while he looks at a syringe in his jacket. He walks into bank as his symptoms worsen. He calls 911 for help and to send a message to his wife before collapsing on the main floor and dying. Everyone in the bank is freaking out and then the doctor checking Paul determines he may have been contagious and places everyone under quarantine.

Elizabeth Keen is at Donald Ressler’s house telling him the whole story about Tom and that she will do whatever it takes to find him. Ressler says he will help her, but she has to tell the FBI everything first. She shares everything she knows since the day she met him (July 9th, 2010) while agents pick through her entire apartment and storage facility where Harold Cooper looks at a charred piece of paper with “Berlin” written on it. Liz says that she believes Tom was inserted into her life to find Raymond Reddington, that his mission was data gathering and counterintelligence, and that she doesn’t know where he is now. Liz also states that she believes his goal was to get inside the Post Office and what she knows about his known associates; Christopher Maly (dead) , Lucy Brooks/Jolene Parker (dead), and Gina Zanetakos; who she learns escaped from prison two weeks ago. She is questioned as to why she didn’t turn him in to which she responds she wanted to see how deep the rabbit hole ran. Meanwhile Tom runs down a guy Red has tailing him and forces him to call Reddington and say he lost the tail. The guy tries to bargain for his life saying he could work for the people Tom works for, but Tom says “you don’t Berlin, Berlin chooses you”. Then he kills the guy and cuts off his distinctive spider tattoo.

Elizabeth goes to Cooper and tries to hand in her resignation. Cooper tells her he believes she had nothing to do with her husband, but the Bureau isn’t so sure. Yet, they know how valuable she is because she is the link to Reddington. Liz says she won’t talk to Reddington anymore because he killed her father. Red has been in the room the whole time trying to give them a case and telling Harold that people are going to die. Eventually Liz gives in and says she’ll do the case and then she’s finished.

Red tells the task force he believes there is a grand conspiracy targeting him and the task force and it starts with Paul Blankenship the man who died earlier at the bank. Paul was killed by the Cullen virus, but Red believes he was just a pawn in a biological army aimed at killing him no matter how many people die in the process and that his death wasn’t part of the plan. While he is talking we see a man in a lab fill syringes filled with a liquid exactly like the one Paul had in his pocket.

At the Westland Bank, Ressler and Liz meet with Dr. Nina Buckner with the CDC who explains that Cullen is one of the deadliest viruses in the world and that all research on it has been banned. She also shares that this version of the virus has been intentionally mutated to stay inside the host, which could not have been done by many people.

Red and Liz are on a plane heading to see Dr. Bruce Sanders, the foremost expert on the Cullen virus. Red tries to convince Liz to stay on the task force and gives her a decode copy of the code book Tom used to communicate with Berlin. Liz switches seats with Dembe so she doesn’t have to sit near Red.

Back at the Post Office, the rest of the team learns that the syringe contained the antidote to the virus, which according to the CDC doesn’t exist. They also read text messages on Paul’s phone ordering him to do his job on the 30th for more treatments and realize that extortion, not an outbreak is happening. Ressler states that Paul chose to die rather then follow orders and Berlin will need a replacement. Sure enough, we cut to another man (Mr. Klein) coughing as he watches a video informing him he has been infected and will be given treatment to survive as long as he follows instructions.

Red and Liz reach the hospital where Red’s old Dr. friend is at. When Dr. Sanders starts talking about Space Agent UD-4126 Liz gets fed up and leaves on her own because she thinks Reddington is wasting her time. Special Agent Walter Gary Martin tells Cooper that if Liz walks the task force will be done and Red will be put in a dark hole forever. He also mentions that Liz and Cooper’s futures with the Bureau are also in doubt given recent events and the way the task force is ending.

Liz arrives back and is asked by Meera Malik and Ressler if it’s true she wants to leave. They then tell her that Dr. Sanders does have the answers and he is the one who created the antidote for Cullen. Liz has to go back to Red and ask for his help to talk to Dr. Sanders. Back with Dr. Sanders Liz tries to get answers from him about who UD-4126 is, but he starts getting agitated by her questions. While the nurse is comforting him Liz sees her badge and gets an idea. This leads to Aram Mojtabai being able to identify the man as Dr. Nikolaus Vogel.

Ressler and Liz rush to his home, find the lab with all the antidotes and arrest Vogel. While he is being interrogated Cooper tries to convince Liz to stay so the task force won’t be finished. She says she isn’t strong enough for all of it to which he responds that she is and then she calls Reddington to set a meeting where he will be taken. Dr. Vogel isn’t talking so Liz infects him with Cullen to blackmail him into giving her the information.

Liz starts reviewing old cases and realizes that all of them have been connected. She explains to the team that Red wasn’t using them to expand his empire, he was using them to protect himself from his enemy, not a place but a person who is coming for him today. Dr. Vogel gives them the names of the people he infected and the team connects them all to airports realizing that a jailbreak is about to happen. Liz tells Cooper she’s made a mistake trying to resign, but he says it’s too late for Reddington and they’re going to take him, she rushes off to save him.

Aram uses video from Dr. Vogel’s laptop to figure out the plan as the five infected individuals smooth the way for Berlin’s plane to land. Unfortunately for Berlin, Meera and Ressler show up guns blazing and force him to abort the landing. Liz gets to Reddington, tells him it’s a setup and that he needs to leave. He senses she has a change of heart and stays so she can tell him about it. Military jets are scrambled to shoot the plane down, while the hooded man on the plane orders the pilot to land the plane on the East River. The FBI shows up at the park and surround Reddington. Red and Liz watch the burning plane fly over and crash nearby. Red says, “now it begins” and the episode ends.

Liz refuses to work with Red after discovering the truth about the death of her father. Seeking to make amends and force Liz to see him, Red brings the FBI a case they can’t ignore. Meanwhile, Liz reveals what she knows about Tom's secret life to the FBI. 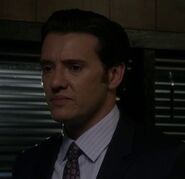