7
Clark was a member of The Blacklist. 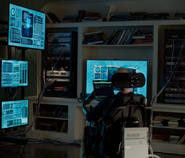