Edit
watch 01:22
Who is Constantin Rostov?
Do you like this video?
Play Sound

Constantin Rostov is a criminal and a member of The Blacklist.

Rostov is a businessman and the legal father of Elizabeth Keen, whom he truly believed to be his biological child. He was married to Katarina Rostova at the time of Masha Rostova/Elizabeth Keen’s birth, which makes him the legal father, despite not being the biological father. Dom married his daughter to Rostov in exchange for favors.

After the fall of the Soviet Union, Rostov, adopting the alias “Alexander Kirk”, took advantage of the broken economy to purchase several mining and oil operations at low cost. In 2002, following a series of politically motivated raids on his companies by the Russian government, Rostov fled the country.

He is now an oligarch, who not only is a billionaire in the energy field among his many other enterprises, but also has his connections to many political powers across the globe, financing their rise to power, including current presidential hopeful Senator Robert Diaz. He and Red have a long personal history. They appear to go back 20+ years to the fall of the Berlin Wall and the end of the Cold War. This appears to be an allusion to the “war” Red has been mentioning.

Rostov has a rare blood disorder (a trait that has been passed down from father to son in the Rostov family), which requires frequent transfusions. Even so, it is apparent that he has less than a year to live. A possible cure for Rostov is to use stem cells from either Liz or Agnes, as they are both immune to the blood disorder. Red explains to Liz that this is the reason for Rostov's obsession with her and Agnes.

When Reddington interrogates Susan Hargrave, she tells him that Halcyon Aegis was contracted by Alexander Kirk to find and deliver Elizabeth Keen.

A DNA report in Alexander Kirk's SVR file confirms that he is Elizabeth Keen's father. The authenticity of the report, however, is questionable.

Rostov sets a meeting with Keen and is eventually captured.

A subsequent DNA test reveals that he is not in fact Elizabeth Keen's father. Liz confronts Rostov about this, but he refuses to believe it.

Rostov escapes federal custody and kidnaps Elizabeth, making his personal doctor run the DNA test again, only to get the same results. His lawyer and secret lover, Odette, convinces him to believe it. Red calls Rostov to make a deal: his life for Liz's own. Once Red arrives, Rostov tells Odette to let Liz go. He then has his men strap Red to a chair and reveals poisons underneath it. Red offers to help cure him through the services of Dr. Sonia Bloom, but Rostov doesn't believe him and demands answers from Red as to whether he is Masha's father. He begins poisoning Red, but a few of Red's men arrive with a former patient of Dr. Bloom's to prove to Rostov that there is a cure. After ordering their men out, Rostov demands that Red tell him the truth, and Red finally confesses that Liz is his daughter. As Rostov is about to kill him, Red asks him how he and Katarina met, wanting to remember what kind of woman she was. Rostov answers that she dared him to enter a house filled with people, calling it a moment when he saw the true Katarina. Red whispers something into his ear which persuades him to stop. The two share a look before going their separate ways, leaving Rostov's whereabouts and fate unknown.

When Liz questions Red about Rostov, he only responds by telling her that he won't be bothering them anymore.

Red is confronted by Harold Cooper about letting Rostov go. All that Red will say is that Rostov is “gone” and that he won't be coming back, before changing the subject.

It's revealed that Dominic Wilkinson had set up Katarina Rostova's loveless marriage with Rostov in order to gain access to the assets that he had for the KGB. When Katarina had an affair with the real Raymond Reddington and got pregnant, she lied to Rostov about him being the father under the orders of Ivan Stepanov and spent the next 2 years with him before eventually leaving Rostov for good for Reddington. 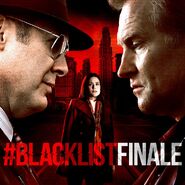