The Blacklist Wiki
Register
Don't have an account?
Sign In
Advertisement
in: Deceased, Season 3 Characters, Season 4 Characters,
and 4 more

Died from his injuries

Dominic Wilkinson is the father of Katarina Rostova and grandfather of Elizabeth Keen.

Not much is known about Dominic Wilkinson' past aside from the facts that he was born in Russia and that he is a notorious KGB agent that operated in the United States under the code name “Oleander”, having been investigated by the FBI. Sometime in his life, he had his daughter Katarina Rostova with Virginia Loving. Dom trained Katarina to be a KGB agent just like him and, as her handler, Dom assigned to Katarina the mission to seduce and spy on Raymond Reddington. Following the end of the Cold War, Dom moved to a reclusive house in the United States and assumed the identity of Dominic Wilkinson, a retired systems analyst, and cut down all ties with his family to protect them from reprisals. When it was discovered that Katarina Rostova betrayed the KGB for the Cabal, Dom helped his daughter to escape from Russia and disappear. One year later, following the formation of the Townsend Directive, Dom tried to kill a KGB agent named Tatiana Petrova with a car bomb in Belgrade after framing her as Katarina, in order to keep his granddaughter Masha safe from the Directive, but he failed and killed Tatiana's husband instead.

Dom is among the very few who know that Raymond Reddington is not the real Raymond Reddington, but an imposter who took over his identity over 30 years ago. As much as Dominic despises him, he has shown to care for Red, as he respected his wishes in not letting his granddaughter know what happened to her mother.

Reddington who is mourns the death of Elisabeth, takes refuge with Dom at his place who is Katarina's father and Liz's grandfather. Red then informs him of the latter's death and the birth of Agnes his great grandchild. Dom does not like Reddington and makes it clear to him on several occasions, that he has nothing to expect from him, no compassion, because as far as he is concerned, he is responsible for the death of his family and they for there is no comparison between the grief he had and hers. Later dom persuades the Reddington to lend a hand to those who have come to ask for his help as he still has a reason to live.

Red goes to Dom's house to retrieve a box, his last resort after Mr Kaplan's relentless attacks on him. He tells him that Masha (Elizabeth keen) is alive, that she faked her death to run away from him and that he didn't tell him she was still alive as it was to protect him from his enemy who doesn't know of Dom's existence and who could have gone after him to get to him or Elizabeth.

He met his granddaughter Elizabeth for the first time, though he didn't divulge his true identity to her. However he did share on how he knew her mother Katarina. After she left, Dom called Reddington to inform him of Elizabeth's visit, in the end he expressed his frustration on having seen his granddaughter for the first time in 30 years without informing her of who he is. Dominic also warned him to stop being evasive and tell her the truth about what he did, to which he hung up on him.

Ressler confessed to Elizabeth that he went behind her back and continued looking into the real identity of Raymond Reddington. He then showed her what he thought was a dead-end (the Post Office photo of Dom).

Elizabeth went to see Dom the next day, asking him to say hello to his granddaughter.

Dom gives Elizabeth fresh mint tea and tells her the story of what happened to Katarina after her attempted suicide in the ocean. She ended up in a women's shelter. Dom reveals that he gave up everything to protect Katarina.

Liz learns from Katarina that Dom lied to her about who Red really is and that Dom is the one who wants her dead to protect Liz. Dom and the real Illya had conspired together to kill Katarina to protect Liz, and failed. Liz confronts Dom, still comatose and on a ventilator, about his actions.

Dom is wounded by Katarina.

As Liz learns the truth, Dom appears to her both in flashbacks and as an image to help explain. It's revealed that Dom had actually told Liz most of the truth about her mother and Ilya Koslov, but he had lied about who had become the fake Reddington. Liz also learns that Dom and Ilya had set up a woman named Tatiana Petrova in order to fake the real Katarina's death, but only killed her husband instead. It was Tatiana and not Katarina who had tortured Dom in order to find Katarina's location and get her life back by revealing the truth to Neville Townsend. Dom had revealed to Tatiana where she could find Katarina before he died, forcing Reddington to kill Tatiana to keep her from revealing that information to Townsend. 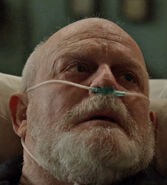 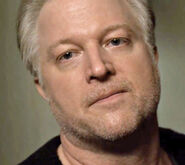