“Dr. James Covington” is the third episode of Season 2 of The Blacklist and the twenty fifth episode overall. It aired on October 6, 2014 on NBC.

A man is met at an outside street corner cafe by another man, who threatens him. The first man runs away into the street, where he's almost hit by a car. The driver of the car drugs him. When the man wakes up again, he's being taken in for surgery, and is drugged again. Police roust a sidewalk of homeless people, and find his half-naked corpse with a Y-incision exposing his inner organs.

Elizabeth Keen wakes up scrambling for her gun and finds Tom Keen holding her gun on him. He warns her she can't trust Raymond Reddington, because he'll kill her as soon as he gets rid of Berlin. Reddington bursts in with a gun. When Tom tries to tell Elizabeth something about the night of the fire and Naomi Hyland, Reddington kills him. Elizabeth wakes up to discover it was just a dream.

As she leaves her motel, she sees a man following her. She jumps him and checks his belongings to find he's what he says he is, just a guest staying at the same motel.

Reddington is discussing business with Niko Demakis. He wants “the syndicate” to take over an Indonesian port. Niko warns him that tripling his investment at this time is risky given his war with Berlin. Reddington dismisses him. Elizabeth arrives with Dembe Zuma, and asks Reddington about the whereabouts of Naomi Hyland. Reddington diverts her with the death of Paul Wyatt, the man in the first scene. We learn Paul Wyatt was in financial services and under U.S. Securities and Exchange Commission investigation for fraud allegations, until he was found with his heart taken out. Reddington tells her about James Covington, a cardiothoracic surgeon who now runs a black market organ ring for recipients outside of normal channels by killing people for their organs. Reddington doesn't know where Covington is.

Oliver Fleck approaches an obviously sick man in a restaurant, and introduces himself as representing Dr. Covington. He guarantees the quality of the organ being offered, along with a 10 year guarantee.

Back at headquarters, Aram Mojtabai gives the rundown on Covington to the team. Harold Cooper brings in Samar Navabi and announces she's joining the team on an indefinite loan. We learn it took her 74 days to find Reddington, as opposed to Ressler's 5 years.

Ressler and Elizabeth go to the Medical Examiner, who's done the autopsy on Wyatt. He refuses the theory that Wyatt's heart was harvested, since the heart that was taken wasn't originally his. Wyatt was a previous heart transplant recipient.

Interviewed, Wyatt's wife disavows any knowledge of a heart transplant. There's no record of Wyatt receiving a previous heart. On further questioning, she reveals that Wyatt was a customer of Covington, but that the heart was not bought, it was rented. For every year of use, Wyatt had to pay 500,000 dollars. When Wyatt went bankrupt, he was no longer able to pay, so the heart was repossessed.

Niko is meeting with 2 associates about the Indonesian port investment. They all have concerns about Reddington's plan. An agent from Berlin interrupts the meeting and says he's there to make them an offer.

The task force tracks the 500,000 dollars Wyatt was paying to a non-profit called the Wellbright Fund. Looking through the financials, they found the fund paid 200,000 dollars to a general surgeon named Dr. Gordon Albee for consulting.

In Cogan Falls, Maryland, Ressler and Elizabeth meet Dr. Albee, who's the local Medical Examiner. He becomes nervous when asked about the Wellbright Fund and refuses to answer questions.

Niko tells Reddington about Mr. Vargas, and the offer that he made, which was a short window during which Niko and his associates could change sides. He tells Reddington that everyone's still with him, but warns again about the Indonesian Port investment. Reddington asks him to keep him informed. Elizabeth calls to borrow Nemec.

Nemec performs an open-air autopsy on a corpse dug up from its graveyard. She tells Elizabeth and Reddington that the corpse is missing organs, which makes it like the other 3 she inspected. Using that evidence, Elizabeth and Ressler confront Albee, who did the autopsy on all 4 of those bodies. He admits to being a provider of organs under very specific circumstances after the bodies come under his control as an M.E. He reveals details about the transport process and asks for protection.

With Albee's help they set up a sting using a pig heart and a fake medical file.

Niko shows Reddington pictures of his associates apparently meeting with Vargas. Reddington goes to ask them himself.

The courier arrives to pick up the heart from Albee. Elizabeth sends a picture to Aram, who gets an identity on him, Ronald Cassell. Cassell calls Covington after checking the fake medical file to confirm it's a match for their client, the sick man from the earlier scene. Ressler and Elizabeth follow Cassell, who realizes he's being tracked. They're forced to chase him on foot, but Cassell is hit by a car and killed.

Ressler pulls a medical file off of the courier's body that allowed them to identify the intended recipient of the fake heart as Bernard Babbitt. The FBI has been trying to indict him for years.

Reddington finds Babbitt at a restaurant, and asks to be put in contact with Covington. Babbitt has a number to be used for emergency purposes only, and refuses. However, Reddington has poisoned Babbitt with a drug used to cure erectile dysfunction, which causes Babbitt to go into distress, which constitutes an emergency.

Aram tracks Covington's emergency number to a 5 block radius. The team listens to Covington talking about another heart repossession taking place in less than 1 hour.

Vargas meets with Niko, who tells him that his 2 associates have been taken care of: Reddington bought the photo op without needing real evidence. However, in return for betraying Reddington, Niko demands that Reddington be killed. Vargas argues against it, but Niko is willing to give up all the details of Reddington's operation. Vargas agrees and tells Niko to set up the meet with Reddington.

Ressler and Elizabeth arrive at a locked store, the last site they haven't checked in the area, and crowbar their way in. Ressler finds a stairwell to a lower level that's not on city plans. They find 2 children unconscious in hospital beds, and a sterile setup that appears to be for child care. Further in they find a couple and Oliver Fleck. Elizabeth interrupts Covington in an operating room, where he's preparing to transplant lungs into a child who will die in the next 24 hours if he doesn't get them. They stop him.

Handcuffed, Covington explains he lost his license for transplanting adult lungs into a child, an experimental procedure which wasn't acceptable practice at the time but saved the child. However, nowadays there's an appeals process for this. Covington has funneled all his proceeds from dealing with criminals into building the underground transplant clinic for children that gives them a chance with adult organs. He asks to be allowed to continue with his patient since the donor material is already there.

Elizabeth argues with Ressler that Covington has to do the transplant, and asks him to buy her time with Cooper.

Reddington meets Niko, who tells him he's out and introduces him to Vargas and his men, who draw guns on Reddington. Reddington takes Vargas's gun, and Vargas apologizes to Niko, saying he's misled him. The 2 framed associates enter with more of Reddington's men, implying the whole thing was a sting to catch traitors. Reddington reveals to them all that the Indonesian Port deal came through. The Indonesian minister who opposed Reddington's syndicate needed a heart transplant, but the arrangements he made for a new heart had fallen through. He died that morning, and the new minister saw things Reddington's way. Reddington tells Niko a story about installing carpets for a store owner during a summer job. Reddington shoots and kills Niko.

Covington finishes the transplant to save his child patient, then is led away by the FBI. Elizabeth speculates whether Reddington knew Covington was saving children. When Ressler reminds her that for every 1 child saved there were 3 criminals as well, she says that's a tradeoff she'd make. Ressler observes that the Elizabeth of a year ago would never have thought that.

Samar offers to take Elizabeth out for a drink to celebrate the case, but Elizabeth refuses. Samar knows Elizabeth doesn't trust her. Elizabeth warns that if Samar found Reddington, it was because Reddington wanted her to find him. And if she's in the task force now, it's because he wants her there, and they don't know why. That's why she doesn't trust Samar.

In the parking lot of her motel, Elizabeth runs into the other motel guest she frisked at the beginning and apologizes again. The guest accepts her apology, then returns to his room and sets up a very big gun.

Reddington and Dembe arrive at a remote house, where Reddington greets Naomi. She slaps him.

DERANGED DOCTOR FINDS HIMSELF ON THE BLACKLIST – When a man is found with his heart cut out, agents Keen and Ressler team up with agent Samar Navabi to uncover the intricacies of Dr. Covington’s black market operation. Meanwhile, Red and his associate try to capitalize on a new opportunity in Indonesia, leaving Reddington in a vulnerable position. 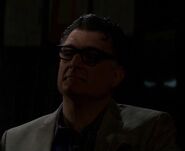 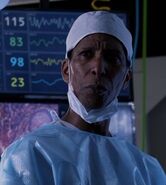 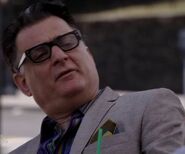 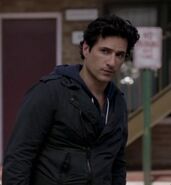 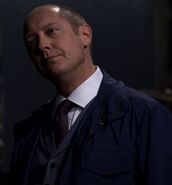