“Dr. Linus Creel” is the fourth episode of Season 2 of The Blacklist and the twenty sixth episode overall. It aired on October 13, 2014 on NBC.

A woman is standing on a sidewalk in front of a bank, overwhelmed by sensory input. A man in a car watches. Inside the bank, she has a conversation with a bank employee: she’s being forced out of her home for delinquent payments. When she returns to her car, she grabs a gun and returns to the bank, opening fire. The man who was watching notes his observations into a digital recorder about the successful final phase activation of “AR-105”.

Raymond Reddington is in a remote house with Naomi Hyland, who is angry and refusing to have her entire life upended again. He tells her she can’t go back to Philadelphia and asks where Jennifer is. Naomi refuses to tell him where her daughter is. She argues she kept her end of the bargain: she didn’t say a word about him or Elizabeth Keen and marvels that he’s working with her. As her husband arrives, Reddington tells her arrangements have been made for new identities, and asks her to let him help.

Elizabeth calls Reddington to demand access to Naomi. He diverts her by talking about the housewife in Reston, the woman in the first scene, who killed a bank manager. In the last 4 months there have been 7 random acts of violence by people with no past history of violence. He states that these are the result of government mind control experiments.

In HQ, they go through the 3 cases that Reddington claims are part of the pattern. Harold Cooper orders them to interview the shooters and families. Elizabeth privately asks Aram to pull Naomi’s phone records.

Ressler and Elizabeth go to interview the housewife, Madeline Thornhill, who’s on suicide watch. She’s talking to her psychiatrist. Interviews with the boss, the ex-boyfriend, and the bank reveal she was getting bad reviews for customer service on Yelp, which resulted in her being fired; Social Services was getting anonymous calls that she was mistreating her ex’s kids, which resulted in her boyfriend leaving her; and that she was 3 months behind in payments, which resulted in foreclosure. The psychiatrist Madeline is talking to turns out to be the man who was watching her from the car.

Back at the Post Office, Elizabeth reports on findings that anonymous accusations resulted in her life falling apart. Samar Navabi reports the shooter she talked to lost his job for the same reason. Amar ran the DNA profiles of the 3 perpetrators. All three had the MAO-A2R gene, which makes people prone to extreme, antisocial behavior.

The psychiatrist from earlier is watching a car chase on TV, while recording notes on the second stage success of “AR-106”. The news reports officers have just opened fire, at which the psychiatrist notes activation of subject AR-106 concluded. He calls Senator Sheridan and identifies himself as Dr. Linus Creel.

Elizabeth reports to Cooper, who’s heard the car chase perp had the gene. Samar has identified 11 other cases in the last 18 months. Privately, Cooper tells Elizabeth that these government programs are true. He tells her about Subproject 7, a black budget program funded out of the Defense Intelligence Agency to use genetic predispositions to train and trigger assets.

Ressler and Elizabeth talk to a senator friend of Cooper who oversees black budget, who neither confirms nor denies Subproject 7, but promises to send over any pertinent documents. As they leave, Linus Creel arrives to see the senator.

All the paperwork the senator sent over has been redacted. Samar knows a resource called the Polyglot who could take their black ops budgets and make sense of them. She doesn’t know where he is.

Reddington identifies the Polyglot as someone named Haskell, but they had a falling out over a craps table. When he and Elizabeth visit him, Haskell closes the door in his face. Reddington gets them in by paying Haskell money that he lost at the game. Elizabeth poses as a blogger wanting his help for a scoop. Haskell has unredacted documentation on Subproject 7. It was born out of the Human Genome project, and reverse engineered from the brains of serial killers. It uses a 3 phase activation process. Phase 1: disruption of daily life. Phase 2: destabilize sense of self-worth. Final Phase: sever primary emotional bond. Elizabeth sees a picture of the Subproject 7 team’s lab assistant, Dr. Linus Creel.

The team reviews info on Creel, who works as a locum tenens at 6 area hospitals. At some point he was on staff at each of the hospitals. He has an intake questionnaire on his web site based off a real personality test that highlights aggression and low impulse control.

A woman named Monica enters a house on the phone with Naomi’s husband Frank, who he’s apparently been having an affair with. Her dog greets her. Vargas is inside the house and berates her about her care of her dog. The woman threatens to call the police, but Vargas’s men sit her down so Vargas can talk to her.

Naomi is asleep in the remote house. Reddington takes Frank for a walk and expresses that over time he’s come to feel for Naomi like she’s an estranged sister rather than an ex-wife. He’s concerned for her happiness and well-being. An SUV approaches. Reddington asks Frank to come take a look inside.

Elizabeth asks Aram to feed a fake medical history into a hospital’s system with a full psychiatric history.

The SUV door opens and Monica’s dog comes out. Frank recognizes it as belonging to Monica and demands to know what happened to her. Reddington assures her Monica is fine, but tells Frank he’s going to be a good husband from now on, accept Reddington’s help, and leave Philadelphia. When Frank refuses and threatens to call the police, Reddington uses a stick to threaten Frank’s jugular and tells him the only reason he’s still alive is that he makes Naomi happy.

Creel is talking with a distraught patient, Duncan Prince, who’s been expelled from school after Creel told his school that he’d cheated. He urges the patient to take responsibility for his actions. Elizabeth poses as a woman in the ER who needs a psych consult after problems with her husband drove her to put her hand through a window. Aram and Samar listen in remotely to Creel’s interview with Elizabeth. Elizabeth tells Creel that if she “was above the law”, she’d keep her husband Tom prisoner and make him tell her all the truth about all his lies.

Back at the house, Frank convinces Naomi that they have to leave Philadelphia, and persuades her he changed his mind because he couldn’t live with himself if something happened to her.

Creel hands Elizabeth the personality test and leaves to expedite her bloodwork. Elizabeth grabs his laptop out of his bag and with Aram’s help, hacks it to get a password.

In his room, Duncan has apparently been rejected by a girl he met over the internet. Upset, he pulls out his gun and bullets.

Aram has hacked Creel’s laptop and identified 12 patients, 11 of which have killed someone. The last one, Duncan, is the only one who hasn’t. Samar and Ressler go to his address and ask his roommates where he is.

At a public community forum on gun violence prevention that’s about to open, Creel takes a picture of the activity.

The team determines that the internet girlfriend Duncan was talking to doesn’t exist, and that Duncan is armed and in the wind.

Creel argues at the public forum that to prevent gun violence, the first step is genetic screening. The team sees that the fake internet girlfriend’s profile has been updated with a photo from the forum, and that Senator Sheridan is there. They believe Creel will be there as well to view the experiment.

Creel is making a case for genetic screening of children to the senator, citing his 7 years of research. He’s frustrated that the senator hasn’t been taking his calls and won’t meet him. He claims he can stop the violence. Outside the forum, Duncan records a suicide note blaming his internet girlfriend. He shoots in the air, scaring people away. Creel approaches him and tells him his girlfriend isn’t there. Creel tells Duncan that the girlfriend doesn’t exist, he created her, and that Duncan is there to kill him. He proves it by reciting the messages they exchanged.

The team arrives and tries to talk Duncan down. Creel doesn’t want to die, but he believes that being killed by Duncan will force the world to read and talk about his research. Duncan shoots and wounds Creel. Ressler tackles Duncan, but when Elizabeth goes to help Creel, Creel pulls a gun and takes Elizabeth hostage. Before they can negotiate, a sniper kills Creel out of nowhere. Samar and the team spot him, he’s the man from the motel in the previous episode.

Back at the Post Office, Samar gives Elizabeth her genetic results from Creel’s tests. She suggests the results are meaningless, and then asks if Reddington knew Elizabeth would learn the results if she took the case on. Aram gives Elizabeth the results of the phone trace on Naomi and Frank. He traced back calls to Monica to a number at a rural gas station in Maryland.

Elizabeth knocks on a door and Naomi answers. Elizabeth admits she wants information about her connection with Reddington from Naomi, but Naomi doesn’t give any real answers, beyond saying that Reddington isn’t who she thinks he is. Reddington, who’s been listening in, interrupts any further conversation.

Naomi prepares to leave with Frank, but before she does tells Reddington she doesn’t know where her daughter Jennifer is. Jennifer knew he would come for her one day, so she left. Reddington gives Naomi contact information for him in case she ever needs anything. Naomi leaves.

Elizabeth asks Reddington about the sniper. He confirms the sniper works for him, and that he’s been following Elizabeth since the day Meera Malik died. Elizabeth wants him gone. Reddington suggests if he didn’t know better, he’d think she had something to hide.

The closing scene is of Elizabeth sitting in a basement and playing with some keys to a locked door nearby. The implication is that Tom is a prisoner behind the door.

SOCIAL PSYCHOLOGY EXPERIMENT YIELDS DEADLY RESULTS – After a series of seemingly nonviolent citizens become killers, Red tips off Liz that a dangerous social-psychological experiment may be underway. Elsewhere, Red tries to convince Naomi and her husband into accepting a complicated proposition.

Number on The Blacklist[edit | edit source]

Slanders on the FBI[edit | edit source] 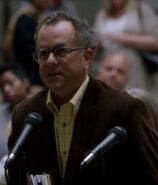 Red
Add a photo to this gallery

Retrieved from "https://the-blacklist.fandom.com/wiki/Dr._Linus_Creel?oldid=45237"
Community content is available under CC-BY-SA unless otherwise noted.