“Drexel” is the fifteenth episode of Season 3 of The Blacklist and the fifty ninth episode overall.

A man spending the first night in his house, he is on the phone with his business partner and bragging that their start-up company is growing faster than 98 percent of other companies in the country. He hangs up and is attacked and strangled to death by an intruder. He props his victim’s body up on the couch and puts a glass of full wine in his lifeless hand and pretends to snap a photo of the dead body before he leaves.

Meanwhile, Tom is being rushed in to the emergency room, he tried to remove one of his bullets himself and he is bleeding out. Of course, the doctor on call is Liz’s ex and he recognizes Tom. Elizabeth is freaking out because she hasn’t heard from Tom. She pays Red a visit at an art exhibit and demands to know if he did something to Tom.

Red says that they have other problems, a crime scene photo has hit the internet of Randy Brenner, he was the man that was just killed in his brand new house in Virginia. It wasn’t a burglary gone wrong or a crime of possession, it is a “work of art” by the serial killer and performance artist Drexel. Last year Drexel murdered a CFO of an animal feeding operation, he hung the man up on the hook like the cattle that they butcher.

Red explains to Elizabeth that Drexel’s work shows up in unexpected locations, and he has fans that follow his underground protest movement. Drexel released a poster with Brenner’s dead body on it and the caption, “Coming Soon! The next masterpiece is underway!”. It looks like he plans on killing again.

Elizabeth takes Drexel’s poster back to the FBI to brief them on the murder. Red is trying to track down a reporter named Ramona, supposedly she landed an exclusive interview with the killer. Cooper can tell that something is wrong, he takes Elizabeth aside and asks if everything is okay, Elizabeth confesses that she is upset because Tom is missing. Elizabeth realizes that Samar must have told Cooper about the adoption.

Ressler visits the crime scene in Virginia and gets briefed by the local police. Randy’s partner Joseph Adelson found his body that morning when he showed up to work on their project. Ressler looks around the crime scene and finds a camera – he realizes that Drexler has been watching the crime scene live all morning.

Ressler and Samar sit down with Joseph Alderson to discuss his and Randy’s company, they built a website that combines stocks, trading news, financial research, and news all in one portal. Joseph doesn’t understand why they are asking so many questions, he thought Randy’s death was just a burglary gone wrong. Ressler can tell that Joseph is hiding something, but he doesn’t think that he knows who the killer is.

Aram calls Ressler to update him on the camera that he pulled from the crime scene, he hasn’t seen anything that complex since the NSA had a model on display at a security briefing. Ressler tells Aram to call the security director and set up a meeting ASAP.

Meanwhile, Red is up to his usual tricks, he shows up at a Chinese restaurant and orders the Fugo Kimo, it’s a poison found in blowfish. If it is cooked properly then you will get an adrenaline rush, if it is cooked wrong then you will die. The chef throws a rage rant and asks Red what he is thinking, Red laughs and says he doesn’t want the blowfish. He is looking for information on the reporter named Ramona that interviewed him last year.

Ressler and Samar meet with the security director, he confirms that the spy tool is from the NSA. He tells Ressler that if someone has it, and it is “out there in the wild” then they have National Security Issue. That camera software can be used to hack in to anything and access the cameras, even baby monitors. The director takes Ressler and Samar out on the floor and looks for one of the employees named Aaron Mulgrew, if anyone knows how the software got released, then it is him. As soon as the FBI agents are spotted, Aaron makes a run for it. Samar and Ressler chase him down and bring him in to custody.

Red is busy trying to track down Ramona, but Elizabeth tracks him down. Elizabeth is freaking out, she blames Red for Tom’s shooting. Red laughs that he had nothing to do with it, it was all Tom’s doing. He tells her about the diamond heist that was worth over a 100,000,000 dollars and tells Liz that Tom’s ex-girlfriend Gina was working with him on the robbery. Red says that Tom is obviously reckless and dangerous and isn’t “worthy” of being a father.

Donald questions Aaron and he gives them his computer so that they can track the computers that downloaded the NSA software from the website that he put it on. They use the process of elimination to track down the most recent download in NYC. They rush to the address and Ressler and Samar find something interesting, it’s a sketch of a tombstone with Reddington’s name on it. Red is going to be Drexler’s next victim.

Elizabeth gets a phone call from the hospital, Tom is awake, she rushes back to the hospital to see him. She barely has time to hug him and a cop barges in and tells her that she needs to leave the room. As she is pushed out the door she shouts at Tom not to say a word and to wait for a lawyer. The police begin questioning Tom, he insists that it is all a coincidence that he came in shot and happened to match the description of one of the robbers.

Meanwhile, Aram has been researching the address. He learns that Drexel’s real name is Reginald Turner and he rented the apartment about 7 months ago. At the apartment Ressler and Samar find research on Joseph and Brenner, he has been watching them for over 6 months, there obviously is a whole lot more to the start-up company that got Brenner killed.

Red finally tracked down Ramona, he blackmailed her in to giving up Drexel. Red and Dembe follow Ramona to an art gallery where she is supposed to meet up with Drexel for an interview. Ramona slips away and in to the basement, Red and Dembe chase after her. Red and Dembe find Ramona in the nick of time, right before Drexel kills her.

Back at the FBI office, Aram makes a shocking discovery, Brenner wasn’t the only person that Drexel was watching. He had camera feeds on 4 other people’s computers set up. They rush to one of the addresses and it turns out to be a warehouse and Brenner’s partner Joseph is in charge, they have computer systems up on the wall that are hacked in to hundreds of random peoples’ webcams at their homes.

Samar is baffled and asks “What the hell is this place”. Joseph explains that their financial app was just a front. They were running a “Rat Farm”. They have thousands of feeds in to sorority girls houses, politicians, cops, whoever you want to spy on. And, they were charging people subscription fees to watch the stolen feeds.

At the hospital, Nik explains to Elizabeth and Tom that he is the one that arranged for Kirken to lie. Apparently, Nik works for Red too. When Tom came in, he called Red and told him what happened. Red saved Tom for Liz. Elizabeth pays Red a visit afterwards and thanks him for getting Klerken to lie and getting Tom out of his latest jam.

The FBI is arresting Drexler, Red actually didn’t kill him and gave his location to the feds and let them have him. It looks like this story isn’t over though, Aram still has unaccounted for computer feeds, and it looks like Drexler may have had an accomplice.

Elizabeth pays Tom a visit back at the hospital, she tells him that she has changed her mind and she wants to keep the baby and they are going to be a family.

Red is still trying to track down Rostova, he heads to an address where a painting was commissioned by her. When he arrives the dealer is already expecting him and says that Rostova knew he would be coming and she wanted him to have the painting. Red unwraps the painting and it is a picture of a tombstone with his name on it, just like the sketch that Drexler made.

After the founder of a successful internet start-up is found dead, Red recognizes the crime scene as the work of a notorious killer. Liz and the task force work with Red to track the murderer through a dangerous underground news source. Meanwhile, Tom faces a life threatening situation, while Liz considers options for her baby.

Slanders on the FBI, NSA, and PoliceEdit 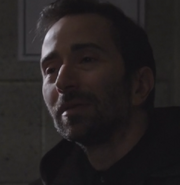 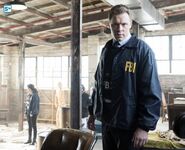 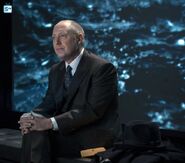 Retrieved from "https://the-blacklist.fandom.com/wiki/Drexel?oldid=46283"
Community content is available under CC-BY-SA unless otherwise noted.