Poisoned by the Freelancer by order of Raymond Reddington

Floriana Campo was a character in the NBC series, The Blacklist.

Campo spent 15 years working for the United Nations stationed mostly in Eastern Europe and occasionally in North Africa. She was also instrumental in passing the Victims of Trafficking and Violence Protection Act of 2000. Afterwards, she founded a non-profit human rights organization that raised over 35,000,000 dollars to fight human and sex trafficking. In 2010, her husband was killed by the Eberhardt Cartel, a notoriously ruthless human trafficking organization. Elizabeth Keen wrote her senior thesis about her work in Kuala Lumpur.

Red knew that her organization was a front for the Eberhardt Cartel. She had ordered the murder of her own husband to gain control of the cartel. Her charity was a front that gave her a positive public image and allowed her to focus the attention of law enforcement on her competition. Campo had several of her own shipments intercepted to maintain the illusion she opposed human trafficking and people smuggling.

She had offered Raymond Reddington a percentage of the profits in exchange for his help in setting up new smuggling routes, but he had refused. He later stated that he despised her on a personal level because of the extreme duplicity of her operation.

Red had her poisoned by the Freelancer and forced her to confess to Elizabeth Keen. Her death was reported as a suicide. When her financial transactions were traced to her operation, the media published details of her criminal operations.

It is revealed that Floriana was a member of the Shell Island Retreat. 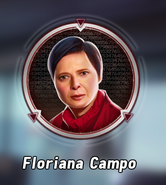 Retrieved from "https://the-blacklist.fandom.com/wiki/Floriana_Campo?oldid=44337"
Community content is available under CC-BY-SA unless otherwise noted.