The Blacklist Wiki
Register
Don't have an account?
Sign In
Advertisement
in: Deceased, Criminals, Season 2 Characters,
and 2 more

Peter Fonda
Geoff Perl was the head of the Mombasa Cartel, a criminal organization that dealt in poaching.

Perl was the CEO of Deckerd Capital and the 33rd wealthiest man in the world as well as a well-known philanthropist who supported the protection of endangered animals. As a young man, he was a member of the Animal Underground Network, a militant animal rights organization, under the name “Sean Salter”. He left 2 years before the 7 core members (known as “the Sitka Seven”) were convicted of stalking and killing a pack of grizzly bear hunters, resulting in the group's effective disbandment in 1971. During his time staying at the network's commune in Sitka, Alaska, he had a brief relationship with a woman named Skye Kincaid, resulting in the births of two sons, Peter and Matthew, the latter of whom was mentally handicapped. At some point, he (supposedly) came to the conclusion that the only way to save the world's endangered species from total extinction was to control the poaching market, so he founded the Mombasa Cartel.

Grossing hundreds of billions of dollars a year, the organization became responsible not only for enabling poaching and dealing in rare and illegal animal products and exotic pets, but also the assassinations of numerous members of competing poaching organizations. The murders were usually carried out by, or at least with the assistance of the Kincaid family. After the targets were abducted and brought to the Sitka compound by Peter, who tagged them with ear tags, Matthew would hunt them with a bow and arrow, kill them, skin the bodies and stuff the skin using taxidermy. The bodies, now flayed beyond recognition, would then be dumped in the ocean. Acting through mercenaries, the Cartel was also responsible for instigating corruption among authorities and political assassinations to further its own goals and the deaths of several African natives, sometimes whole villages, who stood in their way. Among them were the family of Dembe Zuma, who were killed in Sierra Leone when his father informed the authorities about them.

Perl is first seen at a party where Liz meets him under an alias as a blogger looking for information on the cartel (at Reddington's direction).

Reddington confronts Perl at Perl's home and tells him Dembe's story. Dembe asks him not to shoot Perl, saying, “that was then,” Reddington kills him anyway.

Perl‘s corpse is identified as one of those taken to the ice rink by Kathryn Nemec. 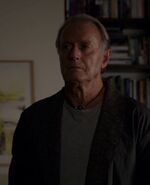