The Blacklist Wiki
Register
Don't have an account?
Sign In
Advertisement
in: Criminals, Season 1 Characters, Season 3 Characters,
and 2 more

Margarita Levieva
Gina Zanetakos is a member of The Blacklist.

Gina Zanetakos is a corporate terrorist for hire who commits acts of terrorism that result in the corporations who hire her gaining an advantage over the competition. Raymond Reddington said Zanetakos once contacted him for help in assassinating a Supreme Court judge. She was once in a romantic relationship with Tom Keen. Due to the fact that Zanetakos has the exact same kind of box of passports and cash that Tom had, right down to the symbol on the lid, suggests that she might be another graduate of the Major.

Using the alias Shubie Hartwell, she entered the United States. She was hired by the Hanar Group to detonate a dirty bomb in the Port of Houston. The explosion would have allowed the Hanar investors to profit from the re-routing of sea shipping to New Orleans. After being captured, she was allowed a plea bargain since the bomb had not devastated the port. A search of her apartment produced a photograph of Tom Keen who she claims not to know. When questioned about the murder of Victor Fokin, she claims to have committed the crime on the orders of Raymond Reddington.

Elizabeth Keen is told Gina escaped during a work furlough.

Desperate for money, Tom inquires if Gina can offer him a criminal opportunity. She recruits him for a diamond heist. She states that the Major is still hunting Tom.

When Tom Keen comes to her apartment for peace, she agrees to help him.

Gina tracks down Tom as a favor for the Major, but later kills the Major to protect Tom. 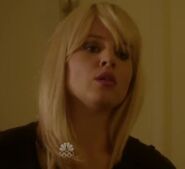 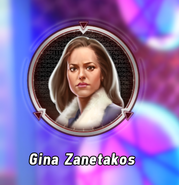