The Blacklist Wiki
Register
Don't have an account?
Sign In
Advertisement
in: Employed by Raymond Reddington, Criminals, Deceased,
and 6 more

Glen Carter was a tracker employed by Raymond Reddington.

In his day job, Glen is just another cog in the machinery at the Department of Motor Vehicles office in Washington D.C. However, he also has a separate line of work as a “tracker” for Raymond Reddington, presumably using his position at the DMV to access personal information needed to locate people and objects.

In “The Front”, Reddington has employed Glen to find Zoe D'Antonio. After spending 45 minutes waiting in line for a meeting with him, Red is upset that Glen has not found her yet. Glen complains that he wasn't given a lot to work with and that he has been distracted because his mother is dying of cancer. Red does not buy it, saying that Glen has made similar excuses, such as his brother-in-law having Legionnaires' disease and his house being flooded, and leaves.

Later in the episode, Glen calls Red and tells him he has found Zoe. When Red meets Glen to receive the information he arranges for a new vending machine to be installed in the DMV waiting area.

Reddington enlists Glen to locate the safe in St. Petersburg which Alan Fitch told him about just before his death. After tracking down the building, Glen asks to come with him for the search, inventing a story that he has never been outside the country since his childhood vacations were always within driving range. Reddington believes him and accepts, and then finds out that Glen was actually raised in London.

After the flight to St. Petersburg, during which Glen insulted the flight attendant, Reddington, Dembe and he search an apartment for the safe. When Reddington states his doubts about the location, Glen explains that he went through Fitch's financial records and found that apartment 221 belonged to him. Reddington points out that he has taken them to apartment 212. When they search the right apartment, Reddington finds a wall safe that contains a business card.

Sensing something amiss about Dembe's disappearance, Red calls Glen to investigate what happened to him. At first, Glen, who is playing Tetris on his computer, doesn't answer the phone. When he does, he pretends to have been interrogated by the FBI and to have given up Reddington just to mess with him before admitting that he was joking. Accepting the assignment, he traces Dembe's last known location to a restaurant and is able to distract a host working there long enough to steal the video recorder. At his office, Glen investigates the recorder and is alarmed. He calls Red to inform him that they have a problem.

Dembe approaches Glen so that he could put a "friend" in the jury pool in Reddington's court hearing. Glen says he will inquire around.

Glen ran a credit check on Francesca Campbell and discovered she wasn't married, proving that she had lied to Reddington about herself.

Glen accidentally gets a car used to smuggle tritium into the country redirected to a dealership in Scranton. Unable to purchase the vehicle, he has to take part in an endurance test to win the car. Despite saying he did it to prove himself to Reddington, Glen is sad to see the car being dismantled, but his sadness is shortlived as Reddington gives him a brand new Mercedes Roadster as payment.

Glen has died of West Nile virus and requests that Reddington get Huey Lewis to play at his memorial service and to spread his ashes at the Statue of Liberty, having lied to his friends and family that all of his money came from helping Huey come up with the lyrics to one of his songs. Initially reluctant, Reddington attempts to convince Lewis without success, but the musician later changes his mind. At the same time, Dembe steals Glen's ashes from his mother's house. Reddington, Dembe and Huey travel to the top of the Statue of Liberty where Reddington delivers a moving and emotional eulogy to his friend before spreading Glen's ashes.

Glen's mother Paula Carter discovers a manuscript that Glen had written about his adventures with Reddington and learns the truth, admitting that it makes much more sense than Glen being the muse for Huey Lewis. While Red is shocked by Glen writing the manuscript, neither Paula nor Dembe are. When Paula asks for a loan, Red gifts it to her and uses the excuse of buying Glen's manuscript from her when Paula insists on paying him back for it eventually. Paula tells Red that she does not think that Glen sent the manuscript off to any publishers before he died. 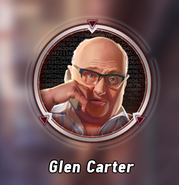