7
Hannah Hayes is a member of The Blacklist.

Hannah Hayes first hit the headlines 7 years ago when she was a college intern in surgery and was raped on campus, which resulted in her getting pregnant. Hannah decided not to keep the baby and have an abortion, but her state had strict abortion laws that would not allow her to carry on with her wishes, and when she tried to defy those laws, Hannah was sent to prison. Hannah gave birth to her daughter behind bars. After her rapist left prison on an earlier release, he filled for parental rights over his daughter with Hannah. This was the last straw for Hannah, leading her to kidnap and imprison her rapist in her basement. Fed up with men trying to control and impose their values over women´s bodies, Hannah initiated a clandestine operation ring and started to abduct proeminent and anti-abortion male politicians and other major conservative leaders, so she could surgically implant a uterus and fertilized embryos into their bodies. Following the procedure, Hannah would wait until the resulting fetus had its first viable heartbeat, which would forbid her victims to perform an abortion legally according to their states anti-abortion laws that they so eagerly supported or even helped to draft, and then released her now pregnant patients. Also, the father of all the embryos Hannah implanted into her victims was her very own rapist.

She kidnaps her victims who are transplanted at first a uterus while being put on immunosuppressants. Once the organ is in place, a fertilized embryo is introduced. When a viable heartbeat is heard, the hostages are released. At this point, the baby can no longer be aborted. All of these men live in states with restrictive abortion laws.

But Hannah Hayes is not alone in her fight, many people support her and are ready to be arrested for her, which happens to all her medical team.

When the officers go to her home to arrest her, they discover that she has her rapist, her daughter's father, and that he is the father of the embryos she implants. She explains her gesture, the fact of not being able to forget, not having had a say, the fact that her attacker was released for lack of space in prison and because, icing on the cake, he wanted to assert his parental rights over his daughter. She kills him so that he does not have custody and then goes to the FBI. 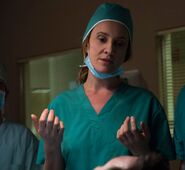