The Blacklist Wiki
Register
Don't have an account?
Sign In
Advertisement
in: FBI Agents, Season 1 Characters, Season 2 Characters,
and 12 more

He was an officer in the US Navy prior to joining the FBI. In 2003 he was the senior FBI agent in Afghanistan. He is now the Assistant Director for Counter-terrorism at the FBI.

When Raymond Reddington surrenders to the FBI he asks for him by name, and then says nothing. Once Red deduces his arrival he then gives them information on Ranko Zamani. He then states that he will only talk to Elizabeth Keen.

Once Cooper has established (off camera) that the Elizabeth Keen in question has just graduated from Quantico as a profiler, he has her brought to office for a preliminary interview, where he questions her about her history and why she is Reddington's chosen intermediary.

After she stabs Reddington, he places Keen on review, but allows her to enter his hospital room where she discovers that Reddington has escaped.

After the successful operation he again meets with Reddington and agrees to the new conditions.

After agreeing to Red's terms at the end of “Pilot”, Cooper takes the deal to the Department of Justice, where Diane Fowler turns his request down.

Once Red has established that Floriana Campo is Alban Veseli's target, and that only Red can identify the Freelancer, Fowler reluctantly agrees to an off-the-record deal, stating that Red will never earn immunity. Cooper presents Fowler with the dossiers for Dembe Zuma and Luli Zeng as being the least offensive people on the list supplied by Red for his security detail. He accepts Fowler's addition of Meera Malik to the detail.

Prior to this episode, he ordered that he be informed of any request by Elizabeth Keen.

When Donald Ressler brings him the unredacted ballistics report, he says that briefing on this homicide includes the Secretary of Homeland Security.

He discusses Elizabeth Keen's interest in the classified homicide with Ressler, and they decide that she does not have enough information to investigate. He agrees, however, that Ressler should accompany Liz to court to keep tabs on her and any investigation she is mounting.

He watches the initial interrogation of The Courier and when Raymond Reddington says that a doctor is needed, arranges for a doctor to examine the Courier.

Upon receiving the doctor's report, he orders the Courier to be transported to hospital for a full body scan and the removal of all the objects embedded in his body

When Laurence Dechambou is brought in for questioning, Red tells him that she will not talk as she was being groomed to become the French version of him. Realizing that time is running out for Seth Nelson, Cooper agrees to Red's suggestion that she be released.

After Tom Keen is brought in for questioning Cooper meets with Liz and tells her that she is on leave and is not to be involved in any operations until the situation is resolved.

Red threatens him with revealing details of an event in Kuwait unless Liz is brought back onto the active team.

When briefing Donald Ressler and Meera Malik about the threat posed by Gina Zanetakos he explains that as circumstances are not normal, Liz will be involved in the investigation.

After the discovery of Tom's photograph in Gina's apartment, he has another meeting with Liz and Ressler where he tells her that normally she would not be involved in this case, but they need her to liaise with Red to find Max Ruddiger and discover what Max was doing for Gina.

He tells Liz about the main business of the Hanar Group, enabling her to discern (with help from Red) that the target of the dirty bomb is the port of Houston.

Cooper informs Elizabeth Keen that she will be subjected to a review board for her decision to violate FBI regulations when she lowered her weapon and allowed Frederick Barnes to escape.

After the bombing of a cargo aircraft he asks Red for help in identifying the culprits. Red tells him that he's not a consultant and if he wants his help he will have to give him access to the FBI's ViCAP (Violent Criminal Apprehension Program) system. After some more discussion, with Liz arguing that the bombers need to be stopped, he agrees.

After the second bombing, he refuses Liz's request to fly to Nebraska because all commercial aircraft have been grounded. He them show the team a video that the General Ludd organization had sent to the FBI declaring war on coporate America.

Meera Malik presents her research on John Horlbeck to him, which shows that Nathaniel Wolff's plan was to ground all aircraft, so that the Bureau of Engraving and Printing would have to transport supplies of cash by armoured car. The identity of Horlbeck is an armoured car guard.

Upon the successful completion of the operation he gives Red a one-time access to ViCAP.

When Raymond Reddington is brought back from Munich, Cooper is initially skeptical about the threat to the Post Office. Once the threat is proven he orders Donald Ressler to escort the handcuffed Red to the box while he leads the defense from the Armoury. He orders the Post Office evacuated and the computer systems destroyed.

Once captured he is brought to the box by Anslo Garrick's men, where they try to force him to open the box.

After the FBI counterattack at the Post Office, Cooper is lectured by Diane Fowler. He convinces her to reactivate the task force when Elizabeth Keen locates the building with the transmitters and computer drives, and Aram Mojtabai finds footage that shows that Fowler and the FBI were under surveillance.

He declares that the newly reactivated task force has only one job: find Raymond Reddington.

When Elizabeth Keen hears about a new Good Samaritan killing, she asks Cooper if the team can be assigned to the case. Her reason is that because she failed to catch the perpetrator in New York, Red may contact her and offer his aid. Cooper agrees, but points out that the team are all under investigation regarding the incursion.

With Diane Fowler he observes the interrogations of the team.

Part way through the Good Samaritan investigation he takes Meera Malik aside and tells her that she has been cleared. Meera tells him that Liz has been in contact with Red.

Meera shows Cooper the results of an investigation that implicates Aram Mojtabai in the planning of the incursion.

Aram is brought into the Post Office by security after he was found in the car park. Aram gives Cooper Red's dossier showing that Newton Phillips was the mole.

When Liz first brings Red's information on The Alchemist to the Post Office he is skeptical, especially as the Madrczyk's bodies have been identified at the site of an airplane crash. He tells Liz to bring Red to the Post Office. When she says that Red thinks there is another mole, he tells her that the investigation has cleared everyone but tells her to meet Red offsite.

After hearing Cooper telling Meera that the job is “first, second, and third” when she arrives late claiming that her child was unwell, Liz decides not to ask for time off after her baby is born.

After Owen Mallory has been arrested, he tells Meera Malik that he despises Raymond Reddington's personality and methods, but Red has allowed them to find important criminals. He then tells Meera to go home.

Along with Donald Ressler, he questions Liz about her past.

He tells Meera Malik to investigate Raymond Reddington's recent actions. He states that Diane Fowler is dead and Red is the only suspect. Even if Fowler was the mole, Red is not the “judge, jury, and executioner”.

After realizing that Red has the locations of the “Kungar 6” nuclear warheads, he agrees to give Red the Effigy of Atargatis in exchange for the warheads.

He is taken prisoner by Ruth Kipling, who intends to kill him if Alan Ray Rifkin is executed, since she has evidence that Cooper tortured Rifkin for a confession. Just before he is about to be executed Raymond Reddington provides proof of Rifkin's guilt to Kipling, and he is released.

He asks Ressler where Keen has been for most of the investigation, and is skeptical about Ressler's vague response.

He tells Aram Mojtabai that the death of a senator triggers a special election.

He is seen outside sitting with Walter Gary Martin after Meera Malik's death speaking about Raymond Reddington. After he enters the car, he is almost killed by the same assassin who was presumably working for Milos Kirchoff. In the end, he is seen on a ventilator next to Donald Ressler.

Red visits Cooper at home, where he is recovering from his injuries, and hands him his only copy of the information relating to the incident in Kuwait. Red also tells him that he knows about his illness, but encourages him to return to work.

The episode ends with Cooper returning to the Post Office, where he is welcomed by the task force.

He tells Liz about Subproject 7 and how Red's “carpet pulling” has reminded him of the negative aspects of his position.

Cooper asks Aram Mojtabai to contact the FSB to get Kiryl Morozov, but Reven Wright orders him not to, presuming that Reddington has resources available and will eventually be able to find a way to track down Morozov.

To get the hotel employee to tell the FBI where Elizabeth Keen, going undercover as Josephine Sullivan, was located, Cooper threatened to kill him by mentioning that his tumor would kill him in a matter of days and he had “nothing to lose”. This does not confirm that the clinical trial had failed, as Cooper could have bluffed.

When Keen searches a flashdrive found in Leo Andropov's safehouse, she finds a lot of files about Cooper and his glioblastoma, leading her to realize that Cooper's doctor is working for the Cabal. Upon hearing the news, Cooper goes to the doctor's office and forces him to admit that his so-called glioblastoma isn't real. The Cabal, which threatened his family through Connolly, had Andropov create a drug that gave him the symptoms of a brain tumor. After he had been further convinced with fake brain scans, he was given the same drug in varying doses to make him feel like the tumor was in remission.

After his confrontation with Connolly fails, he attempts to convince Keen not to kill Connolly. After she kills him, Cooper tells Keen to flee and is later relieved of command. It is presumed that Harold Cooper will be removed from his position and be replaced by Ressler at the end of this episode, but his role has yet to be identified.

Cooper regains his position of Director, which Agent Ressler willingly concedes, after Elizabeth Keen is cleared. He also begins divorce proceedings with his wife, Charlene, after she confesses she had been cheating on him. He moves out of his home and begins sleeping in his office at the Bureau. One night, after working late, Aram realizes Harold is sleeping there but Cooper asks that Aram keep it between the 2 of them. After calling in a favor, Reddington informs Harold that he knows he sleeps on the floor of the office and that he should forgive Charlene and go home.

Cooper and Ressler exchange confession letters that will be sent to the prosecutor after the Blacklist is completed. 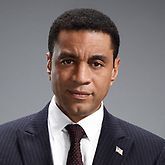