Ilya Koslov is a character on The Blacklist and an old friend of Raymond Reddington.

Ilya Koslov is a former KGB agent and a childhood friend/lover of Katarina Rostova. Also, Ilya is one of Raymond Reddington´s oldest and dearest friends and they seem to know each other since they were children. After Katarina Rostova staged her suicide in Cape May, Ilya helped her disappear. Ilya devised the plan to impersonate Raymond Reddington in order to gain access to the money the Cabal placed in his name to frame him for treason, so they could fund Katarina´s new life. A year later, Ilya was called by Katarina Rostova´s father Dominic to a meeting at a cafe in Belgrade. Dom told Ilya that his plan with Katarina didn´t work and informed him that Katarina´s enemies joined forces and formed the Townsend Directive to hunt and kill her. Afraid that the Townsend Directive could harm his granddaughter Masha, Dom enlisted Ilya to help him kill Katarina to calm down the Directive and keep Masha safe. Still in Belgrade, Ilya, following Dom´s plan, lured Katarina to an ambush where he and Dom tried to kill Katarina with a car bomb in front of the whole Directive, but they failed and ended up killing her new husband instead. After that, Ilya went into hiding. He started a family and left the life of espionage and crime behind him, though he still kept in touch with Raymond Reddington.

It is revealed what happened in Belgrade. 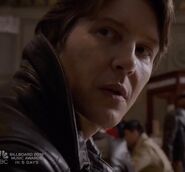 Retrieved from "https://the-blacklist.fandom.com/wiki/Ilya_Koslov?oldid=43124"
Community content is available under CC-BY-SA unless otherwise noted.