For the character of the same name, see Ivan.

Nathan Platt is working alone in his research office when the computer network is breached. He hurriedly removes a tablet computer from a safe and goes to his car, calling a contact to say that he is headed to the backup site with the prototype. An unknown hacker causes his car airbag to inflate resulting in the car crashing. The unknown hacker removes the prototype and flees the scene.

Raymond Reddington and Dembe Zuma meet Kathryn Nemec in the forest and she shows them the bodies of Lucy Brooks and the Cowboy in the grave where Tom Keen buried them. Red tells Nemec to leave the bodies where they are, as he already knows who murdered them. He then calls 9-1-1 to report a missing person from Dembe's cell phone.

At their home Elizabeth Keen gives Tom an Uncle Flippo flashlight, an item with which a school teacher should be familiar. Suddenly, the police arrive to question them about the disappearance of Jolene Parker, who is known to be a substitute teacher at Tom's school. Tom and Liz say that they have not seen or heard from her since Liz recieved a call from her saying that she was moving to Dayton, Ohio with her fiancé, whose name they do not know.

Liz visits Red, who is working on a restoration project involving a clockwork mechanism, who tells her that Platt's car accident was no accident and was caused by a notorious Russian hacker named Ivan who had previously stolen from Red. Liz is skeptical, because Red says that Ivan stole from him, until Red says that Ivan took credit for the attack on the deep web. Liz states that the task force will not aid Red in a vendetta. Red informs Liz that until now, Ivan has only done business in Russia, and the fact that he has now ventured into the U.S. is alarming and dangerous.

At the Post Office, the task force analyses Platt and the accident. Aram Mojtabai offers to check the vehicle's electronic control unit to determine if it was electronically manipulated. Liz asks Aram if he could produce Jolene's phone records, and gives him her number.

Liz, Donald Ressler, and Aram arrive at the junkyard where the wrecked vehicle was brought. While Aram sets up his equipment, Liz asks Ressler why he is working and not taking time off to grieve. Ressler says that his job takes his mind off Audrey Bidwell. Aram discovers that the airbag was deployed before the crash, and that a message, which spells “Ivan” in binary, was intentionally left in the content addressable network bus. They also discover the casing that housed the stolen prototype. Then, other government agents arrive and demand that they step away from the car.

Harold Cooper and his entourage arrive on the scene. Cooper questions Agent Galarza of the NSA, and he agrees to give them information on the suspect in return for information on what was stolen. Galarza takes them to the headquarters for “Project Skeleton Key”, and introduces them to David Fisher, the lead engineer on the project. Fisher explains that the Skeleton Key has been in development for 5 years, and is a revolutionary cyberwarfare weapon designed to override entire infrastructures. He states that it can infiltrate the most secure networks in minutes. The suspect stole a prototype of the weapon.

Liz relays the new information to Red, who remarks about the use of tax dollars and the government's failure in preventing the situation. Liz remarks that it will be a challenge to reach out to Russia and locate Ivan. Red reveals that Ivan is currently in Minsk, Belarus. He tells Liz of a plan to get Ivan to talk, which involves creating a problem for Ivan and solving it.

At a restaurant in Minsk, Red finds Ivan and sits down at his table. He uses his FBI Ten Most Wanted Fugitives wanted poster as a calling card. Red reminds Ivan of the time when he stole approximately 5,000,000 dollars from one of Red's bank accounts in the Grand Cayman, and states that he has come to collect the money plus interest. Ivan initially does not cooperate, until Red informs him that an arrest order has been issued for him, and that U.S. agents are en route to detain him. Red offers Ivan safe travel out of the country to evade the authorities, which Ivan eventually accepts. They move into the kitchen, where Red forces Ivan to transfer 8,000,000 dollars into one of his accounts. As they make their way outside, Ressler spots them and starts running towards them. Ivan quickly gets into a waiting vehicle, while Red pulls out a gun and supposedly shoots Ressler. As Red leaves with Ivan, Meera Malik walks up to Ressler who is lying on the ground. Ressler asks if Ivan “bought it” and it becomes apparent that the whole event was a ruse.

Back at their home, it is the middle of the night. Tom walks down the stairs and approaches Liz, who is researching Jolene on her laptop. She tells him that she has discovered that Jolene's real name is Lucy Brooks, and that she is a convicted felon. Liz is unsettled over the fact that she let Lucy into their home and bedroom. Tom comforts her, saying that she could never have known her real identity. Liz commits herself to finding her and finding out who she works for.

At The Post Office, Aram confronts Liz and shares the information he obtained regarding Lucy's phone records. It turns out that Liz was her last outgoing call, and cell tower data indicates that she called from an address on La Vista Street in Brookland.

Red questions Ivan about the Skeleton Key on his private jet. He asks Ivan what his motivation was for stealing it and offers to double the price of Ivan's employer/buyer. Ivan replies that he was not involved; someone who is good at covering their tracks is impersonating him. Ivan states that his vendetta has always been with Russia, and he has no reason to interfere with the United States. He fears a unmanned aerial vehicle drone attack. He also states that he has not yet been able to identify the hacker. Red offers to assist him in this regard.

The task force discusses the unknown hacker at The Post Office. They deduce that he has been operating for 3-4 months and had recently breached a secure defense network that contains valuable information on black budget projects. He has also hacked into pornography and gift card websites, and he breached the Social Security Administration to raise benefit payments for someone.

Meera and Ressler visit someone known as Mrs. Lee at her residence. They confront her about her benefit payments, which have increased by 1200 dollars since September. She says she was not aware of the change. After it is revealed to her that a computer hacker is most likely behind it, she mentions her grandson who helps set her thermostat. They deduce that the grandson could be the suspect.

The scene cuts to a high school classroom. A class is about to take a math test, for which the class will have 55 minutes. A teenage boy sitting at one of the desks is shown looking at a girl sitting to the left of him. He also looks at the wall clock behind him, which shows the time to be 1:00. As he finishes, he looks at the clock again, and this time it shows 1:15. He needed only 15 minutes to complete the test, implying great intelligence.

Tom is loading a gun at the hideout on La Vista Street when he gets a call from Liz. She says that she has been looking into Jolene's case, and names the exact address that Tom is staying at. After looking at the security footage of the outside of the building, Tom realizes that Liz is standing right outside. He frantically scrambles to clean the wall board of photos and evidence, putting the papers in a bin and pouring an accelerant over them. Liz enters and sees the shelves of camera lenses, guns and the computer monitor displaying the surveillance footage. Outside the back, Tom sets fire to the papers in the bin and moves out of sight. Liz walks outside and carefully looks around, gun in hand. As she moves back inside, Tom forcefully pushes the door into her, knocking her to the ground. Tom quickly walks over to her and punches her in the face before she can get a good look at him. He bolts for another exit door and is gone by the time Liz gets there.

The FBI arrive at the high school and Harrison Lee flees using a tablet to activate an evacuation drill. He then activates the Skeleton Key and cuts power to D.C., lures a girl from his high school that he's been stalking to an abandoned metro station. Keen finds him and convinces him to surrender.

Liz goes home and notices Uncle Flippo in the pictures from Tom's lair and she realizes that Tom is not what he purports to be. She then goes to see Red and listens to the music box that Red fixed while remembering a fire and her dad. She realizes that Red knows about her past and hugs Red who kisses the top of her head.

A HIGH-TECH CYBER DEFENSE ASSET IS STOLEN BY A MYSTERIOUS ASSAILANT – When a new cyber defense asset gets stolen all roads lead to a Russian cyber terrorist known only as “Ivan”. With Red’s assistance, Liz discovers a huge cover-up. Meanwhile, new evidence surrounding the disappearance of Jolene helps unravel some of the mystery behind Tom.

Slanders on the FBI and NSA[] 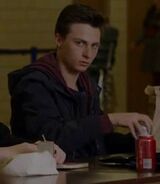 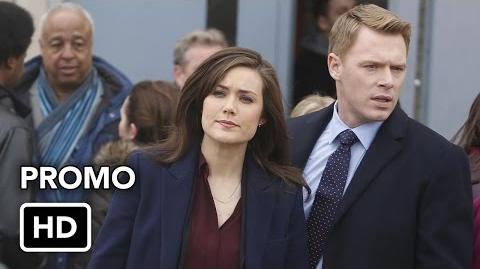