Ivan Stepanov is a character on The Blacklist.

Ivan Stepanov is a Russian spymaster that works for the SVR and the Zaslon subunit, where he was responsible for running black operations. A protegee of Dominic Wilkinson, Stepanov has been a longtime friend and ally to Raymond Reddington and is the former handler of Katarina Rostova. He and Reddington are part of a select few with access and knowledge to a blackmail file known as the Sikorsky Archive.

Stepanov summons Raymond Reddington to Moscow to answer for the actions of Elizabeth Keen.

Red returns to Moscow for a reckoning over the loss of the flash drive he received from Stepanov, along with a harsh warning from Ivan that Harold Cooper will be the next target if he accesses the drive’s contents.

Andrew Patterson travels to Moscow to warn Stepanov that Red is compromised due to his inability to stop Cooper from investigating their operations. Stepanov orders the assassination of Cooper.

After losing a valuable asset, Stepanov flies out to meet Red to threaten him over the ramifications of recent events. Red makes an even more serious ultimatum to Stepanov to never threaten him with the SVR again, or interfere in his endgame.

Stepanov decodes ciphered intelligence from a newspaper classified ad, revealing the Task Force was duped by a decoy message embedded in a photo of a public billboard for a telephone psychic.

Ivan is captured by Neville Townsend.

Ivan suffers torture at the hands of Neville Townsend. Under duress he whispers a confession to Neville that immediately sets Neville on a mission to kill Elizabeth to torture Red. In the aftermath, Ivan meets Elizabeth for the first time, and to his shock realizes he recognizes her as Masha Rostova. Liz learns he was a protege of Dominic Wilkinson and closely involved with her mother. In private, Ivan chokes up with emotion over finally getting to see Masha after 35 years only to put a target on her back.

It's revealed that Ivan was an old friend of both Dom and Katarina and served as Katarina's KGB handler. Later, Ivan had been the person to steal the Sikorsky Archive after Katarina's faked death which became the central core of Red's criminal empire. Neville Townsend is revealed to have learned the truth about Katarina and Red from Ivan during his torture which is why Townsend had started hunting for Liz. 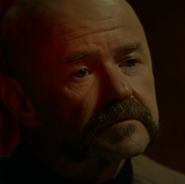