The Blacklist Wiki
Register
Don't have an account?
Sign In
Advertisement
in: Season 1 Cast, Season 2 Cast, Season 3 Cast,
and 6 more

James Spader is an American actor, known for roles in films such as Pretty in Pink, Lincoln, Stargate, Crash and as Alan Shore in the TV series Boston Legal. He plays the criminal Raymond Reddington in NBC's The Blacklist.

Spader was born on February 7, 1960, in Boston, Massachusetts. The son of teachers Jean and Todd Spader, Spader attended The Pike School, his mother's place of work, and enrolled in Brooks School, his father's place of work, for one year. In the eleventh grade, he dropped out and went to New York to pursue acting. Prior to full-time acting, he held a variety of jobs including being a yoga instructor, busboy, truck driver, stable boy, and railroad-car loader.

Spader's first major role was as Brooke Shield's brother in Endless Love in 1981. His first starring role was in Tuff Turf alongside Robert Downey Jr. He didn't reach stardom until his famous role in Pretty in Pink. Since then, he has been in films such as Stargate, Less Than Zero, Sex, Lies and Videotape, Secretary, Keys to Tulsa and The Watcher. He has been in TV series such as The Office, Seinfeld, The Practice, Boston Legal, and narrated the first episode of Discovery Channel's series Discovery Atlas. He voiced the A.I. antagonist Ultron in The Avengers: Age of Ultron. 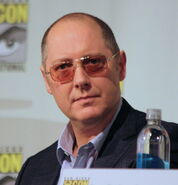