Shot by the Protean

Jennifer Reddington is the daughter of Raymond Reddington and Naomi Hyland. She is the half-sister of Liz.

Jennifer was mentioned at the end when Red demanded Naomi tell him where she is. Naomi mentions that she and Jennifer lost contact after she remarried.

Jennifer is introduced as a bartender living under an assumed name Lilly May Roth whom Garvey visits. When Liz takes Jennifer to her apartment to ask for her help in putting him away, she revealed an abusive relationship she and her mother both endured with Red. Garvey saved Jennifer's life and she was placed in Witness Protection for 20 years while waiting for the day when he is finally brought to justice to face his crimes. Liz then reveals that Red is also her father and they are half-sisters.

Liz asks for Jennifer's help to capture Garvey since he has information concerning the skeleton in the duffel bag. She refuses stating that Ian saved her and Naomi from Red. She mentions it was too late for her and Liz to have a sisterly bond. Jennifer later confronts Ian about Tom's murder, which he suspects she had been speaking to Keen. He admits he kill Red now and that Jennifer never needed to hide behind what truly happened in her past.

Sometime later Ian shows up to Paul's Pub wounded and asking Jennifer for money, telling her to claim it was a robbery in progress. Liz finds Garvey first. Jennifer tells Ian that Red is Keen's father. Red appears holding a gun on Ian. Jennifer confronts Red for abandoning her and Naomi. Jennifer watches in horror as Ian is shot by Keen and Dembe. At the hospital, Jennifer watches as Ian is wheeled into surgery.

Raymond asks Jennifer to bring him to Naomi. She first refused and later changed her mind. She and Reddington met at a restaurant. There she asked him some questions and in return she would bring him to Naomi. It then turned out she has been shot and killed. At Naomi's grave site, Jennifer admitted that her mother cut off contact with her in order to protect her from Red who would one day be looking for her and trusted Garvey to take care of her. She mentioned she hadn't known Naomi had been dead until Frank finally contacted her. Jennifer asks Red if he knows who did kill her mother and he says he did not even know she was dead. Therefore after getting some answers, she asks for Red to not contact her again. Red obliges to Jennifer's request and she leaves so he can give a long overdue apology to Naomi.

Jennifer joins Liz and Sutton Ross in exposing the truth about the duffel bag: they belong to the real Raymond Reddington who was killed and replaced by the unknown impostor who has been known as Raymond Reddington for decades. Jennifer narrowly escapes detection when Ross is killed and later joins Liz at Tom's grave before they depart to get justice for their father.

Liz and Jennifer track a lead in an old newspaper article about a fire in Rehoboth Beach, Delaware. They discover the site of the vacation home which was the scene of the legendary ‘night of the fire’ from Liz’s past. The sisters discover the house is entirely gone, finding only the foundation concrete and a local sheriff with fleeting memories of that night.

Liz and Jennifer toast to their plan to get Reddington out the way while they search for clues to his true identity. Liz expresses overwhelming guilt to Jennifer about going through with it.

While sneaking up on Dr. Hans Koehler’s former nurse Marguerite Renard, Liz and Jennifer are ambushed by a protective detail for her, as she turns out to be the current girlfriend of Hungarian kingpin Marko ”Sarkany” Jankowics. Liz escapes but the armed men throw Jennifer in their vehicle and take her to Sarkany for interrogation. He believes her to be a federal agent until she learns of her sister’s position at the FBI. Fearing nowhere else to turn, Liz enlists Ressler to help her spring Jennifer from Sarkany’s safe house and is forced to tell Reddington of Jennifer’s abduction. Reddington uses his considerable connections in the prison to get Liz the address for Sarkany in Federal Hill, Baltimore. Ressler proposes to Sarkany a trade of stolen drugs from one of his mules, for Jennifer’s life and safe return. Once Liz recovers Jennifer, Sarkany double crosses Ressler but not before Ressler shoots him dead.

After tracking down her grandfather Dominic Wilkinson, Liz finally learns the truth about what happened to the real Raymond Reddington and the identity of the imposter, Ilya Koslov. Liz learns that the man she shot on the night of the fire was in fact the real Reddington who died despite Katarina Rostova and Ilya Koslov rescuing him from the fire. While expressing her concerns about Reddington being publicly destroyed, Katarina expresses concern for Naomi and Jennifer and what they will think of their husband and father.

She is killed by the Protean.

A young Jennifer appears in a flashback as Liz learns about her mother's relationship with the real Raymond Reddington. 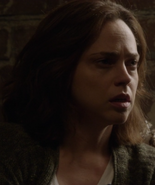