The Blacklist Wiki
Register
Don't have an account?
Sign In
Advertisement
in: Employed by Cabal, Employed by Katarina Rostova, Criminals,
and 6 more

Edit
watch 01:06
Who is Katarina Rostova?
Do you like this video?
Play Sound

Katarina Rostova is the mother of Elizabeth Keen.

Katarina Rostova is a former KGB intelligence officer and the mother of Elizabeth Keen. Trained by her father, Katarina was assigned with the mission of seducing and spying on Raymond Reddington. Also, at an unknown time, Katarina became a double agent for the Cabal and started to work directly for Alan Fitch, betraying the KGB. The real Raymond Reddington, Liz’s father, took Liz from her and fled. Katarina gave up everything to follow her lover and her daughter. When she finally found them, she and Raymond began arguing. The argument escalated into a physical confrontation that resulted in Liz shooting her father to protect her mother. Katarina and her childhood friend Ilya Koslov pulled Reddington from the fire in an attempt to save his life, but failed and Reddington died. She then gave up Liz to protect her.

Constantin Rostov, Katarina’s husband, told Elizabeth that Katarina and Raymond had an affair which she at some point ended. Upset, Raymond allegedly took Liz from her parents.

Depressed that the child she adored killed the only man that she ever loved, Katarina was never the same again. Two months later she went to Cape May, New Jersey, left her clothes on the beach and walked into the sea.

Both “Red” and Sam Scott told Liz that her mother died. Most people in the intelligence community believe that Katarina Rostova never existed. Several CIA officers viewed her as a Soviet Mata Hari whose career had been glorified for propaganda reasons. She was a myth and had been a cover identity for numerous female Soviet operatives. However, there have been signs that Katarina Rostova faked her own death. Anton Velov was tasked with hunting her down and tracked her to a hotel in Prague. When Anton came, he found that she had left the hotel in a hurry but forgot to take the picture of Masha with her. In “Drexel”, it was revealed that a painting was commissioned titled “Rostova”.

In “Mr. Kaplan: Conclusion” it is revealed that Reddington was involved in Katarina’s fate. Dembe comments that he doesn’t think Elizabeth will “ever be ready to learn about what you did to Katarina”. Red is determined to make sure Liz never learns the truth of what happened to her mother, believing the truth will damage her beyond repair.

Besides Red, only a few people seem to know the truth of what happened to Katarina, including her father Dominic Wilkinson, Kathryn Nemec, Dembe Zuma, Sam Scott, and Naomi Hyland.

In “Rassvet”, it is confirmed that she faked her death by walking into the sea due to the numerous people after her. After Katarina intervened to stop a rape, she realized that Anton Velov would hear of it and know she was still alive. Hunted by Velov and his men, Ilya took on the identity of Raymond Reddington to protect them both and to keep Reddington from being discredited. Katarina met her father when he made it to America himself and promised to send him a letter via a post office box when it was safe for her again. According to Dom, he checked the box every week for 28 years and never once received word from Katarina. As such, Dom isn’t sure she’s still alive, believing that she would have contacted him if she was.

In “Robert Diaz” it is revealed that Katarina is alive and is living in Paris. Red tracks her down and finds her walking on a dark street. Katarina kisses him, and then stabs him with a syringe. A van pulls up and takes Red away and Katarina walks off holding Red’s fedora.

In "Nachalo", it is revealed that Dom had Tatiana Petrova impersonate Katarina in order to protect the real Katerina and her daughter from the Cabal and the KGB. Katerina is alive and in hiding with a new identity with only a few people knowing this information.

In "Konets", after the death of her daughter at the hands of Elias VanDyke, her only living relative is her granddaughter Agnes Keen.

She is briefly mentioned by Peter Kotsiopulos when Liz searches for the truth and finds out that Katarina is her mother. It is also known that she was a KGB spy, wanted by the FBI.

She reappeared in a flashback. As Liz is reading her diary, she not only learns about Katarina’s affair with Red, but also a rare cancer plaguing the males in Rostov’s family. She also mentioned that she is glad that Masha won’t suffer the from the rare cancer that Constantin suffers from due to her gender. Katarina and Liz briefly see each other.

It is revealed that Reddington was involved in Katarina’s fate. Dembe comments that he doesn’t think Elizabeth will “ever be ready to learn about what you did to Katarina”.

Katarina was present when Red was operated on by Hans Koehler as she arranged for him to have the operation.

Alan Fitch is heard on tape ordering Katarina Rostova to frame Red for treason. It’s also revealed that decades ago, she killed Jordan Loving’s lover and burned the left side of his face after he attempted to blackmail her about the tape.

Red tells Keen that Katarina was targeted after she betrayed the KGB.

We learn the history of what happened to Katarina after she walked into the sea and her relationship with the impostor, her friend and lover Ilya Koslov. Though Katarina faked her death by walking into the sea, her fate still remains unknown as her father hasn’t seen or heard from her in 28 years and believes she would’ve made contact if she were still alive. 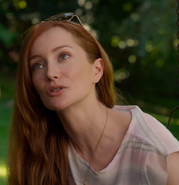 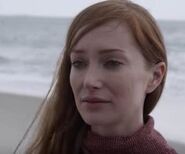