“Lawrence Dane Devlin” is the twenty-first episode of Season 5 of The Blacklist and the hundred and tenth episode overall.

When Samar lands in the crosshairs of an unconventional Blacklister, Aram and the Task Force spring into action to find her before it's too late. Meanwhile, Red journeys to Costa Rica to prevent the duffel bag of bones from being sold to the highest bidder at an underground auction. 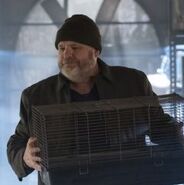