Peter McRobbie (Voice on the phone)
Ned Van Zandt
Leonard Caul is a former Cabal operative and member of The Blacklist.

Born as Joseph McCray, Caul was a spy working for the CIA known (so to speak) for his ability to blend in and conduct covert surveillance. In the 1980s, he was part of Operation Harwood, a CIA operation to keep watch on the Sandinista National Liberation Front in Nicaragua. After the Iran-Contra affair, the operation was shut down and Caul, dropping his birth name, went off the grid and became an agent of the Cabal and an ally of Alan Fitch. Shortly after that, he created the encryption of the Fulcrum, the blackmail file granting leverage against the Cabal.

He answers the phone after Reddington dials the number he found in Alan Fitch's safe.

He arranges a meeting with Red and asks him to stand by a phone booth on a particular street at a certain time. However, since Red has to meet with Samuel Aleko during a prison transfer at the same time, he sends Dembe to take the call. When Caul finds out that Red isn't available, he tells them to arrange another meeting and hangs up. When Reddington tracks down Caul’s location he finds Caul’s phone and a trail of blood presumed to be Caul’s.

In the beginning, Caul is seen in a darkroom filled with surveillance photos of Liz, Reddington and the Task Force members, listening to a secretly recorded conversation between Liz and Tom. When his police scanner tells him about a shooting involving a federal vehicle, the attempt on Reddington's life, he recognizes the license plate number as Liz's car. Before Reddington goes to surgery, he tells Liz to find Caul. With further information from Dembe, she calls the Task Force and tells them about the Fulcrum and asks them to find out who Caul is.

Later, Caul drives to the street where Reddington was shot. He unboxes a brand new laptop and uses it to hack a surveillance camera and get the license plate number of the car Reddington, Liz and Dembe escaped in and tracks the car to Kathryn Nemec's improvised operating room at a warehouse. Afterwards, he destroys the laptop by magnetizing the hard drive. He is later seen outside the warehouse, taking photos of Liz from his car.

When Liz goes to get Reddington's Fulcrum pieces from an apartment he owns, Caul tails her to it and surprises her when she tries to leave. He shows a stitched wound on his neck and two missing fingers on his hand from an attempt on his life by the Cabal in “The Deer Hunter”. He explains that he found out that she and the FBI were looking for him when they ran his fingerprints and looked into his past and figured that they wanted him alive; Reddington knew Caul would be keeping tabs on what they were doing when he told Liz to find him. Caul then opens the Fulcrum to Liz and shows her how the interface works.

Driving back to the warehouse, Liz and Caul see a team of Cabal operatives getting ready to breach the building and drive on. When Caul tells Liz about the Director's allegiance to the Cabal and his feud with Reddington, Liz tells Caul to drive her to Langley, where she shows the Director the Fulcrum and proves that Reddington has it, forcing him to call off the attack.

Reddington meets with Caul at his home where Caul tells him he had hard copies of the Fulcrum made. Caul goes onto say that the Cabal's plans aren't supposed to commence until 2017, but Reddington tells Caul the Director is moving up the time table and to stop him they need to find Kenneth Jasper. Caul tells him that Jasper has fled the country so Reddington forms a plan to fake Jasper's death in order to lure him out of hiding so his company doesn't go bankrupt, and it works.

Caul is seen overlooking all the Cabal's activities trying to figure out Peter Kotsiopulos's endgame. While talking Caul and Reddington discuss that if Karakurt is in the country, his target will someone high profile who is known to be critical towards Russia. Caul briefs Reddington on the virus being used to kill the target and they realize they must have tested it before planning to use it.

Caul tells Reddington about the man who met with Dembe before he went missing, Matias Solomon. A former CIA asset stationed in Ethiopia until he committed such atrocities during the Eritrean-Ethiopian War and the CIA disavowed him. Reddington tasks Caul with finding him before he leaves.

Caul eventually finds where Solomon was holding Dembe but it is empty by the time he finds it and shows Reddington, where he spots a big blood stain on the floor. 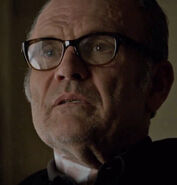