“Luther Braxton: Conclusion” is the tenth episode of Season 2 of The Blacklist and the thirty second episode overall. It originally aired on February 5, 2015 on NBC.

Raymond Reddington drags himself out of the wreckage and looks for a working communication device without success.

In the Post Office, Harold Cooper, Aram Mojtabai, and Kat Goodson assess the situation. The Factory is burning, and there's no visual or audio communication. Goodson has no authorization to send out the Coast Guard for Search and Rescue. Cooper threatens to make the call to send them in, but Goodson tells him the second he makes the call, he'll be removed from his position. She refuses to call in reinforcements without proof of life.

Raymond Reddington and Samar Navabi arrive in the control room. Reddington tells them Luther Todd Braxton took Elizabeth Keen. Together with Reddington they start to assemble together a functional communication device.

In a helicopter not far away, Liz is treated by a medic while Braxton watches. It lands in Juneau, Alaska, on top of a hospital landing pad. Braxton and his men go through the hospital, threatening the staff at gunpoint. Aram has been monitoring flights in proximity to The Factory, and reports that the Federal Aviation Administration picked up a medevac hospital entering Juneau airspace. The Federal Aviation Administration doesn't require flight manifests or flight plans from medevac helicopters. Cooper has the Juneau police informed and distributes Braxton's picture.

Braxton and his men steal an ambulance. The Juneau polic was unable to stop him, but positively identified him. The Coast Guard gets an SOS signal from The Factory, which is proof of survivors. Cooper makes the call for Search & Rescue, with Goodson's assent.

Ressler is communicating with the Coast Guard over radio when Yusuf reappears. He's about to shoot them, but is shot in turn by Desmond, the guard from the earlier episode. A Coast Guard helicopter arrives.

In what looks like an empty swimming pool, Liz is being waterboarded. One of Braxton's men tells him that she might know where the Fulcrum is, but the memory is repressed. Braxton tells Liz the person who helped him repress a traumatic memory will help her remember hers.

In her kitchen, Dr. Orchard is picking up after her son when Braxton arrives. One of his men has her young son, Max. He takes her to where they're holding Liz, and orders her to remember what happened. She objects that it's not as easy as that, but he threatens her son. Reddington calls Braxton using a phone from The Factory. Braxton taunts Reddington about killing one of Red's men. Reddington warns Braxton that he's out of his depth with the people he's dealing with. Reddington tells Samar to look for any associates of Braxton with psychiatric training because he'll need help uncovering Liz's memory.

The Cabal meets with Peter Kotsiopulos, expressing concern about the Fulcrum situation. He assures them that everything is under control, they'll make the missile strike on The Factory public as the result of an inmate uprising of enemy combatants. He has a team working on regaining The Fulcrum.

Back at the Post Office, Cooper and Aram welcome back Ressler and Samar. Aram has identified the psychiatric connection to Braxton: Dr. Selma Orchard. She's an attending in neurology at Walter Reed, and was part of a team that discovered a gene called Tet1 that makes it possible to erase memories by covering bad memories with better ones. Braxton was at Walter Reed as part of the First Gulf War, part of a friendly fire incident with multiple casualties.

Dr. Orchard explains to Liz that she's going to try to recover the memories using a combination of drugs and hypnotherapy to put her into a lucid dream state.

Samar and Ressler go through Dr. Orchard's house. They conclude Braxton has her and her son.

Dr. Orchard has successfully put Liz back into her memories, where grown-up Liz finds herself hiding in a closet with a young girl. Her parents are arguing outside about something the father took, that the mother doesn't like. Also about custody of the girl, who seems to be named Masha. Masha has a live white rabbit. Liz comforts Masha.

Reddington arrives in a restaurant to a group of people who are waiting for him. He thanks them for coming and informs them that their past relationships with Braxton is over. Braxton will likely reach out to one of them for help. If he does, they're to call Reddington immediately. In exchange, they'll get to live.

Metro police called in a possible sighting of Braxton near Anacostia. Cooper orders a canvass of the area. As the team leaves, Cooper gets a call from his doctor calling him into the office to discuss his results.

Liz chases Masha into an area filled with Christmas trees when Masha pursues her runaway rabbit. Masha escapes Liz to run into an unseen man's arms. They end up back in the closet again. Masha desperately tries to stop Liz from going to the sounds of her parents fighting.

In the real world, Liz is seizing so Dr. Orchard gives her drugs to pull her out of it, arguing with Braxton that he won't get anything from her if she's dead.

One of the people Reddington spoke to tells him that he got a call from Braxton, but refuses to surrender the information until he gets paid, despite being told there's a hostage at stake.

Liz and Dr. Orchard talk about Max and memories.

Reddington completes a money transfer for the informant and gets the info on Braxton. Then he punches the informant in the face until he's unconscious.

Braxton puts Max on the phone with Dr. Orchard, then gives her an ultimatum, she has until 9 to get the info. Liz asks her to continue despite the risks, for her own benefit. She wants to know what happened.

Braxton meets with Kotsiopulos and raises the price for The Fulcrum another 10%. When he leaves, he's caught by Reddington and Dembe, who put him in a car.

Liz hears her parents arguing about The Fulcrum. Her father says it's the only thing keeping him alive.

Ressler and Samar arrive at a pharmacy, where Wilson Bishop, a third year resident, is working. He admits to having gotten Braxton some drugs, as well as delivering some medical equipment for him.

Reddington and Dembe enter the building where they're holding Liz and take out Braxton's men. He asks Dr. Orchard if she's okay.

Samar and Ressler leave the pharmacy. While Samar reports the address they got into Aram, Reddington calls Ressler. He tells Ressler about Max's kidnapping. His men have already liberated him, and he asks the FBI to pick him up.

Reddington tries to help Liz remember where the Fulcrum is, while Ressler tries to stop them. In her memory, Liz urges Masha to scream and escape. Liz sees other people in the fire, and remembers that Reddington was there that night.

A medic sees to Liz while Reddington watches. Liz accuses of being with the people who were searching for the Fulcrum that night. She remembers leaving her father in the fire, and there's no way he could have survived that, he must be dead. Reddington points out a 4 year old's memory is not always reliable. Liz rejects Reddington, telling him his pretense of caring for her is no longer necessary because there's no point, she doesn't know where the Fulcrum is. Ressler leads her away. Dr. Orchard is reunited with her son Max.

Kotsiopulos walks into his home while on the phone with someone, assuring them he's going to meet with Braxton soon. When he hangs up, he realizes Braxton is hanging on his wall. Reddington enters with Dembe. Kotsiopulos challenges Reddington's claim that he has the Fulcrum, and Reddington urges him to call his bluff.

Kat Goodson goes on the news to tell the press the attack on The Factory was timed to happen at the same time as the transfer of Reddington. At this point in time, Reddington's location is unknown.

Liz meets Dr. Orchard in a restaurant. Dr. Orchard tells her that she doesn't think she was the first person to go through Liz's memory. It's been tampered with before, so the people and events she remembered might not actually be what happened.

Going through her childhood belongings, Liz realizes her burned stuffed rabbit has a mended seam. She opens the seam and finds the Fulcrum.

As chaos ensues at the Factory leaving the fate of Red and the task force unknown, FBI boss Cooper struggles to rescue his team from the detention facility. Meanwhile, it’s a race against time to stop Luther Braxton from attaining confidential information. 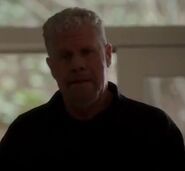 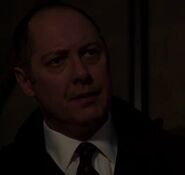