At a bank in Istanbul Turkey, a woman gains access to a safety deposit box by claiming to be the widowed Mrs. Reddington.

Dembe Zuma interrupts Raymond Reddington during an acupuncture session to tell him that the box in Turkey has been emptied out, and the contents replaced with a note. He hands Red the note, and Red opens it to read “Windsor Lounge, 8 pm” the note is signed “M”.

At the Windsor Lounge, Red meets the woman from Istanbul, Madeline Pratt. She explains that she wants him to steal the Effigy of Atargatis from the Syrian Embassy. Red asks about the documents she stole, worth 10,000,000 dollars.

As Liz and Tom Keen are getting ready for work. Tom is talking on the phone to their friend Ryan. When he hangs up he tells Liz that Katie, Ryan's partner is pregnant. This leads to an argument with Liz and Tom walks out.

Liz meets Red and he tells her about Madeline Pratt who wants his help to steal the Effigy of Atargatis from the Syrian Embassy. Liz quickly realizes that Red is using the FBI as his personal strike force, rather than risk his syndicate. Further investigation, with an antiques dealer Red knows, regarding the Effigy of Atargatis reveals that it is rumoured to contain a list of Soviet agents from the Cold War known as the “Kungur 6”. The “Kungur 6” are still active and rumored to be responsible for several espionage coups and severe penetrations of US security. Exposing and arresting them is regarded as the “holy grail” of US counter-intelligence.

At the Post Office, Meera Malik is complaining to Harold Cooper about the fact that he has allowed Red to vet everyone who is working there, and has removed some people from the site, so that Red would enter the Post Office. When Cooper meets Red, he ignores Red's small talk and asks about the disappearance of Diane Fowler. Red suggests that he speaks to Agent Malik, as she works for Fowler. Meera says that she has had not contact. Cooper threatens to imprison Red if he discovers evidence that Red was involved in Fowler's disappearance.

Red then briefs them about Madeline Pratt. He reveals that Pratt uses her public image as a way to infiltrate her targets. Pratt came to Red for help since the Effigy of Atargatis will be returned to Syria soon and there is no time for a months long planning session. Madeline wants him to steal the Effigy of Atargatis, presumably for a Russian client as it contains the Kungur 6 details. When Cooper says that he is not going to agree to Red stealing the Effigy of Atargatis from the Syrian embassy, Red says that he is not a thief, but Liz has the required skills. Cooper and Donald Ressler question Liz and she says that she does not have a criminal record. When Ressler asks if that is because she was never caught, or never committed a crime she replies “yes”. She then states that she can do what Red asks.

Liz and Red meet Madeline and Liz impresses Madeline with her coolness. During this meeting Liz steals and returns Madeline's cell phone. Madeline then shows Liz blueprints for the Syrian Embassy and the location of the secure area where the Effigy of Atargatis is kept. Pratt will supply an autodialer to override the safe's computer lock. In order to access the safe's location, a copy of the Embassy's head of security's swipe card is needed. He goes outside for coffee, wearing the card each day. Liz swipes the card, Aram clones it, and Liz replaces it on his coat.

Red and Liz prepare for the reception. Red reveals that Pratt is attending and that Rasil Kalif is a Russian Mafia member who likely hired her.

Malik and Cooper talk about Diane Fowler's disappearance. Cooper states that Fowler is dead. When Malik says that Red thought Fowler was the mole, Cooper replies that Red is not the “Judge, Jury, and Executioner”. Cooper orders her to investigate Red's current actions and meetings.

Red attends the Syrian Embassy reception as Liz's escort. Red creates a diversion which allows Liz to access the secure part of the Embassy. She waits until the guards begin their security sweep of the hallways before heading for the safe. When Liz opens the safe the alarm is triggered, but the safe is empty. Madeline and other dignitaries are taken to the safe room, while Red steals and discharges a gun to create another distraction, he then heads for the secure area where Liz has been captured by embassy security staff. In the panic room Madeline accuses Red of causing the trouble, and while everyone is distracted, she removes the Effigy of Atargatis from a shelf and hides it in her purse. To Liz's surprise, Red severely overacts before knocking out the guard and rescuing her.

Meera reports that Madeline made a call to a mosque with links to the Syrian opposition and spoke to Rasil Kalif, while Liz tells Cooper that Red is attempting to locate Madeline and the Effigy of Atargatis. Liz calls Tom to let him know that she will be late, and he decides to leave for the Teaching Conference that evening.

The FBI learn that the Kungur 6 are not spies but nuclear warheads hidden all across the United States by the Soviets in the early 1980's and the Russian mafia hired Madeline to steal the statue and retrieve the locations. Meera shows them a schematic of the suitcase nuke that they are looking for based on the time period and smuggling capacity of such an operation.

Red meets with Madeline on a residential street and she tells him that she set him up in revenge for standing her up in Florence. As they are talking, 2 men of Middle Eastern appearance attack them both with stun guns and bundle them into a van.

Madeline wakes in a darkened prison cell just before Red is put into the cell next door. She tells him that she has sold the Effigy of Atargatis to the Russians. Red tells her that he ran out of gas, and so had to walk to his family home on Christmas Eve. When he arrived he found blood everywhere and that was all he saw. He says that is the reason he did not keep their rendezvous in Florence. The guards come back and take Red, Madeline calls out that she will tell them where the Effigy of Atargatis and warheads are located. After telling them Red appears normally dressed and she realizes that he has deceived her. When she asks if the story about is family is true, Red changes the subject.

Liz, Ressler, Meera, and an FBI SWAT team reach the site, Fort Totten, but the Mafia is already there and a firefight ensues after the stun grenades fail to overwhelm the gangsters. Rasil Kalif runs off, Ressler catches him and engages in a fight. Moments later the SWAT team arrives to make the arrest. Ressler opens the Effigy of Atargatis, but it is empty.

Liz tells Ressler that she thinks that Tom is going to leave her, and Ressler cancels his date with Audrey Bidwell to keep her company. When Red returns to the house where he is squatting, a Vermeer painting is missing, and a note in its place from Madeline says that Red can collect the painting in Florence.

Tom books into his hotel and Jolene is who also attending the conference bumps into him.

Cooper receives a visit from Special Agent Walter Gary Martin, of the DC bureau who tells him that they are handling the enquiry into Diane Fowler's disappearance, and that Cooper is not to investigate at all and must turn over all his records on the subject. Cooper's objections are ignored and Martin orders him to end the investigation.

AN ANCIENT ARTIFACT QUICKLY TURNS INTO AN ISSUE OF NATIONAL SECURITY– Liz helps Tom come to terms about their impending adoption while Red reveals that a woman from his past, Madeline Pratt is the next target on The Blacklist. Elsewhere, at an elaborate party at the Syrian Embassy, Red convinces Liz to pull off a covert heist.

Slanders on the FBI and Syria[] 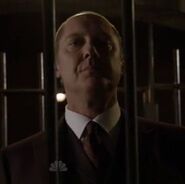 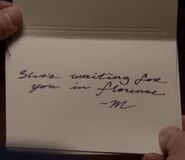