A man escapes from the Abashiri prison near Hokkaido, Japan.

FBI agent Sam Raimo, who is in Tokyo, Japan, greets his wife. He says that they must stay hidden for a few more weeks and goes to review his finances. Later that evening he meets the man who escaped and identifies him as Mako Tanida, a Yakuza boss whom Raimo arrested while hunting for Raymond Reddington in Japan. Tanida talks about honor and then says that if Raimo commits seppuku, he will leave his family alone. Raimo agrees and disembowels himself.

In Washington, Tom Keen comes down for breakfast to find Liz talking to Lucy Brooks about the fact that she is thinking of moving to Washington permanently and asking if Liz can recommend a realtor. Tom and Jolene pretend that they do not know each other.

At the wake for Agent Raimo, Donald Ressler meets up with his old friends Bobby Jonica and Pete McGuire. All 3 agree that the idea of Sam committing ritual suicide is very strange, Bobby theorizes that it was caused by the actions of Reddington. Ressler leaves the wake and goes straight to the Post Office, where he asks Liz to put him in touch with Red. Liz states that Red is looking for him and asks what is happening between the 2 of them.

Red is watching a ballet rehearsal and makes a substantial donation to the company for a special performance on the 22nd of the month. The dancer accepting the donation says that it will be ready like last year. After she leaves, Dembe Zuma informs Red that they have found Agent Ressler. Red and Ressler meet in a country park where Ressler asks about Raimo's death and Red tells him that it was probably Mako Tanida who was responsible. Ressler is suspicious and asks Red if Tanida has double crossed him and now Red wants his head in a box. Red denies this and tells Ressler that Tanida is probably hunting him.

Agent McGuire is approaching his car that evening when Tanida approaches him an introduces himself. Next morning Agent McGuire is found dead under a bridge after apparently jumping. Ressler is briefing the team about Tanida when Meera Malik says that after Tanida's arrest his syndicate expanded and it is believed by her contacts that his younger brother, Aiko Tanida, is now running the syndicate. Aram Mojtabai is informed about Agent McGuire's death and tells the team. Malik uses the Domain Awareness System to track Mako's movements. Harold Cooper orders the resources of the Post Office to be used in the search for Aiko Tanida. Aram discovers that Tanida is already in the United States. Cooper asks who else was on the task force and says he will assign a protective detail to Ressler and Jonica. Ressler leaves saying that he has to get to Audrey Bidwell and transport her to a cabin in Prince Georges County.

Meanwhile, Tom meets Jolene at his makeshift headquarters inside a lock-up garage. Jolene only wants information about what he has been doing, but an agitated Tom explains that he had to go dark after being stabbed and denied ownership of his escape plan.

Ressler reaches Audrey's apartment and notices the door being ajar. While clearing the room, he inadvertently scares Audrey, asking if she left the door unlocked. Audrey answers, stating that she parked in the back to unload things from her car. Ressler tells Audrey about Maguire's death and that he must get her to safety. Tom debriefs Jolene about his findings at the Post Office and records of Reddington's financial payments to Liz's adoptive father, bitterly stating that he could have put a bullet in Reddington when he was sitting next to him at a park, only to be rebuffed by Jolene that “this was not Tom's mission.” While Jolene and Tom wrap up their debriefing, the Cowboy takes photographs of the pair.

During the drive to the cabin, Ressler's SUV is rammed by Tanida's jeep, causing Audrey's head to hit the passenger-side window. During a gunfight, Ressler successfully kills one of Tanida's henchmen and engages Tanida in hand-to-hand combat. Noticing a dazed Audrey trying to walk to Ressler, Tanida fatally shoots Audrey in the stomach. Tanida escapes while Ressler futilely attempts to stop her from bleeding to death.

Back in the Post Office, Cooper tells Ressler to take some time off while the rest of the task force goes after Tanida. Ressler consults with Jonica about potential leads but is told that Reddington might know. Shortly after re-assigning the Cowboy to capture Jolene for questioning, Reddington is approached by a vengeful Ressler. Sympathetic to Ressler's pain, Reddington gives Ressler a lead to a residential house in Columbia Heights serving as an underground hospital. Red warns Ressler that the path of vengeance requires accepting a personal darkness that never vanishes. With the aid of Jonica, Ressler raids the house and shoots the wounded surviving henchman in the leg to get the location of Tanida, being directed to a nearby club. Liz and Malik later enter the hospital, suspecting that Red aided Ressler. Ressler and Jonica are successful in capturing Tanida. Meanwhile, the Cowboy gets captured by Tom while tailing Jolene.

Liz phones Red about her findings and is told that Mako's brother Aiko is actually dead and not missing. At the Post Office, Liz later deduces that Jonica was posing as Aiko after coming across a report that Jonica was escorting Aiko prior to his demise. Concurrently en-route to Ressler's remote cabin, Tanida tells Ressler that when he got arrested, he never heard from his brother. Jonica repeatedly attempts to dissuade Mako from talking, only for Ressler to piece together that Jonica was a dirty agent right after Jonica shoots Tanida in the chest. Ressler grabs the steering wheel, causing a crash.

Tom tells Jolene to abort her mission saying that she is already compromised through the actions Red performed in relation to Wujing and the Alchemist, and feeds Jolene a cover story to tell Liz about her disappearance. However, the Cowboy tells Jolene not to listen to him, stating that he would kill the both of them if she follows Tom's instructions. After Jolene has left the voice message, Tom attempts to stun her, only for a brief hand-to-hand fight to take place. Tom gains the upper hand and suffocates her before executing the Cowboy.

Shortly after recovering, Ressler picks up the ceremonial knife and pursues Jonica. A cornered Jonica attempts to use his friendship with Ressler to talk him out of killing him. Ressler instead berates Jonica for bringing Tanida's wrath on everyone on the team, as well as blames him for Audrey's death while admitting his working relationship with Reddington, giving Jonica the ultimatum of either committing Seppuku or being shot by Ressler. Liz and Malik catch up to Ressler, with Liz barely talking Ressler down. An enraged Ressler fires several rounds in Jonica's direction, intentionally missing him. Jonica weakly apologizes to Ressler before committing Seppuku while the latter walks away. Upon returning to the overturned SUV, Ressler finds it empty.

While Tom cleans up his kills by burying their corpses in the woods, a mournful Ressler sifts through Audrey's belongings, finding a pregnancy test kit. Before breaking down, Ressler receives a consolation package from Dembe with a note attached by Red about recovering from his vengeful mission, with the package containing Tanida's decapitated head. Liz enters the shower with Tom, telling him about the voice message she received from Jolene. At the theatre, the dancers gossip about Red, stating that he has given numerous donations in exchange for a special performance every year. Red watches a performance of the ballet production he funded, reflecting on the time his daughter was the star of this particular performance years earlier.

THE HUNTER BECOMES THE HUNTED – The next target on the Blacklist is one of Red’s past associates, crime lord Mako Tanida. After Tanida escapes from prison he is out for revenge. Elsewhere, Tom confronts Jolene after interfering with his mission. 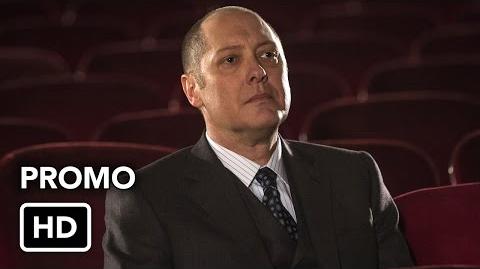