The Blacklist Wiki
Register
Don't have an account?
Sign In
Advertisement
in: Employed by Cabal, Employed by Artax Network, Blacklist members active,
and 5 more

Matias Solomon is a former high-ranking member of the Cabal and a main character in the NBC series “The Blacklist: Redemption”.

He was a CIA asset in Ethiopia until he enlisted for the Eritrean-Ethiopian War (6 May 1998 - 25 May 2000). The CIA disavowed him after he committed horrific war crimes. Despite this, he was in charge of Operation Backslide, a CIA operation to assist Somalia against the Islamic Courts Union (6 June 2006 - 27 December 2006).

Solomon meets with the Peter Kotsiopulos and lectures him for the exposure of the Cabal and the Fulcrum. He tells Peter that his position is shaky.

Solomon is seen at the end of the episode holding Raymond Reddington's bodyguard and driver, Dembe Zuma, hostage for torture.

He drags in Vargas to terrify Dembe.

His name is given as Matias Solomon. Leonard Caul tells Red his history in Ethiopia.

Peter Kotsiopulos manages to force Solomon to restrain his actions by threatening to inform the Bonn located Cabal members of his intentions.

Solomon reveals that his cover occupation is that of a German security contractor.

“Kings of the Highway”[]

He attempts to assassinate Tom, Donald Ressler, and Karakurt in a hidden cabin at an undisclosed location with the group, and is later then incarcerated by Ressler.

Solomon's execution by Cabal agents is stopped by an unknown person who hires Solomon to kidnap Keen.

Solomon appears as a hired hand working together with the Task Force, Tom Keen, Nez Rowan, and Susan Hargrave to conduct an operation against Alexander Kirk.

After abducting Pruitt, Solomon is shot by Tom Keen in a pharmacy in Berlin in an act of anger and vengeance. But when the police chasing them arrive, there is only a blood stain indicating Solomon has fled or was moved.

Hands on the left 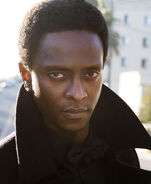