Edit
watch 00:58
Who is Meera Malik?
Do you like this video?
Play Sound

An unnamed daughter and son

Meera Malik was a protagonist in The Blacklist. An agent of the Central Intelligence Agency, Meera is brought onto the Raymond Reddington case at the request of Diane Fowler.

Meera joined the CIA in early 1998 and worked for much of her career as a non-official cover (NOC), stationed in New Delhi, India and various locations in the Punjab region of Pakistan and northern India. She also served in Goiás Brazil. In 2006 she worked closely with the Department of Justice in a still classified on-going operation relating to energy and non-proliferation.

In 2011 she resigned to spend more time with her family. She had a daughter and son, aged 8 and 5 respectively. She rejoined government service at the personal request of Assistant Attorney General Diane Fowler to work with Harold Cooper and the Raymond Reddington security detail.

After Alban Veseli's capture she takes over the interrogation from Donald Ressler and explains that he is FBI while she is CIA. She braces his ankle between a chair and informs him that the compound fracture he suffered on his right leg will need medical attention soon.

When he refuses to answer her questions, she applies enhanced interrogation techniques. Her brutal technique is, however, highly effective, and the Freelancer reveals that it was Reddington who ordered the assassination of Floriana Campo.

Of the agents working with Red, Meera is the most passionate about proceeding with the operation to stop Wujing assassinating another agent.

When Ressler is eager to storm Wujing's bunker, she counsels caution, and is proved right when Henry Cho's name is received. She then informs the others about how he assisted the CIA. She goes with Ressler to try and save Henry. While Ressler is fighting with one of the assassins she finds Henry and his son, arriving in time to shoot the third assassin.

Meera tells Elizabeth Keen that Dembe Zuma is calling about Red wanting a meeting interupting Liz's discussion with Ressler about him accompanying her to court.

She interrogates Hector Lorca with Liz, but, as his lawyer is present, is unable to extract any information. She works with Ressler to identify the Stewmaker as Stanley R. Kornish. When the FBI storms the Kornish home, she questions Ellenore Kornish about her husband.

When she asks Red what he is doing at the cabin where Liz was being held, he responds by telling her that she has a pretty blouse.

Elizabeth Keen and Meera are the ground unit on the stakeout of the Farmer's Market in the first attempt to capture The Courier, they trail Hamid Soroush. When Soroush is shot they pursue the Courier. She drives the car and crashes into the Courier's vehicle disabling it and forcing him to flee on foot. Along with Liz she captures him.

Due to the Courier's inability to feel pain, she and Donald Ressler are unable to force him to reveal Seth's location. When Ressler infiltrates Laurence Dechambou's club she is in the surveillance vehicle and calls in the support once she realizes that his cover has been blown.

Meera and Ressler hunt the Courier down to an isolated location and engage the criminal when he refuses to surrender quietly. They pursue him through the forest when he escapes the abandoned trailer house. They fire upon the Courier, when they move to check him, the Courier has died from the gunshot wounds.

She is assigned to interrogate Tom Keen, initially asking him about the gun.

She objects strongly to Liz's continuing involvement in the case, due to Tom being under suspicion.

When Tom tells her that he had an interview with William Burrows, headmaster of a local school, at the Angel Station Hotel, she visits Mr Burrows and determines that he did not know Tom. When she presents Tom with a picture of Mr Burrows he denies knowing or ever meeting the man in the picture.

She is present in the hospital when Gina Zanetakos says that she does not recognize Tom from his photograph.

She checks with her CIA and NSA contacts regarding the subway attack, and because there was no communication chatter concludes that the attacker was home-grown.

She is present at the meeting where Raymond Reddington says that he has to visit a contact for information about the Strontium 90 used in the gas bomb.

After the second attack she says that the attacks have encompassed a diverse population and wonders if Barnes is conducting a demonstration or an experiment.

She accompanies Elizabeth Keen to the hospital and they discuss Barnes' motivation coming to the conclusion that he was searching for someone with a natural immunity to Kurz disease. They conclude that he will try to synthesise a cure and administer it to Ethan.

She tends to the injured Anne Forrester while Liz pursues Barnes.

Meera Malik was co-ordinating the search for suspects in the bombing of the cargo plane.

When Liz and Ressler return with the evidence from the Denning/Guard home she reports that all the fingerprints belonged to Nathaniel Wolff.

She calls Reagan airport and orders the lockdown after learning that Wolff has penetrated airport security.

When Liz and Ressler report that another alias is John Horlbeck, she researches the name and reports that he is an armoured car driver who works for a sub-contractor of the Bureau of Engraving and Printing. Because of the grounding of all commercial aircraft the Bureau will be transporting 500,000,000 dollars by road, that day.

She was with Harold Cooper in the Post Office when Red was taken into protective custody. She told Red that her CIA contacts had confirmed the assassination threat.

She was captured along with Cooper and the other agents after the failed defense of the armoury.

Meera works with Elizabeth Keen to locate Raymond Reddington. They conclude that an abandoned blacksite near to the communications hub used by Anslo Garrick and his men is probably where Red is being held. She goes on the raid along with Liz and Harold Cooper.

Meera is interrogated like the rest of the team. She tells her interrogator that she has been trained to resist interrogation. She suggests enhanced interrogation techniques.

When Meera learns that Liz has heard from Red and not informed Harold Cooper she tells him at the first opportunity, which is when Cooper tells her that she has been cleared by the investigation.

Meera's contacts provide her with information about a money trail that leads to Aram Mojtabai which she hands to Cooper.

When Elizabeth Keen informs the team that Raymond Reddington says the Madrcyzks are still alive she responds by saying that they have been confirmed as victims of an aircraft crash.

While staking out the restaurant she tells Liz and Donald Ressler that she has not seen the ghost they are supposed to be locating just before Pytor Madryczk enters.

Using the photograph Liz recovered from the dating website she identifies Eric Trettel as the person they are hunting and provides Liz and Ressler with the address for his wife and child.

When she returns to her apartment at the conclusion of the case, Red is waiting for her with a gun. He says that he trusts she knows why he is there, and she responds that he is there to kill her because she is the mole.

After being prepared by Teddy in a secluded room she is interrogated by Red about the leak of the Post Office schematics. She tells Red that she was acting under classified orders given to her by Harold Cooper to start a bidding process for a security upgrade. She tells Red that she does not know who issued the order, but if he lets her go she will find out. When asked why, she responds that friends of hers were killed in the raid, and she wants revenge.

When she returns to The Post Office, she tells Cooper that her child was unwell. Cooper tells her that the job comes first, second, and third. While Elizabeth Keen and Donald Ressler are briefing the rest of the team about the missing women she steals Coopers swipe card and access the classified file and downloads a copy.

She meets Red in a park that evening and hands him a copy of the orders, saying that the authorizing signature is on page 6. Red reads the name and says that their business is concluded.

Upon completion of operation, she is looking at the evidence wall pictures of the rescued women when Cooper approaches and tells her that he dislikes Red and hates working with him, but that without him they would not have achieved so much. Cooper then tells her to go home.

Meera tells Cooper that she has had no contact with Diane Fowler.

She informs Cooper of the type of nuclear warhead revealed to be the real “Kungar 6”.

She is with Elizabeth Keen when they examine the underground hospital. Meera asks how Donald Ressler knew of its location.

She is seen in the search for Harrison Lee in the high school, and later tends to the injuries of Abby Fisher in the subway where Harrison Lee is later located in while Elizabeth Keen is chasing after Harrison Lee.

She informs the task force of the number of bank accounts that are still paying out to the assassin's relatives. She states that it will be nearly impossible to trace the accounts to the contracters.

She surprises Donald Ressler by saying she knew about soup types.

She identifies the Kingmaker by using the information provided by Red to eliminate the impossible's and the highly improbables.

After receiving a warning from Raymond Reddington that the entire task force is being targeted, Elizabeth Keen tries to call Donald Ressler and Malik, who are in the field, back to the Post Office, but can not reach them. Her throat is slit by an assassin presumably working for Milos Kirchoff at a club while investigating the plane crash. 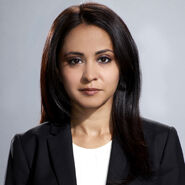 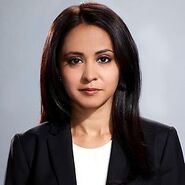 Liz and Meera at the market after the Courier. 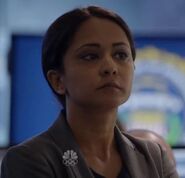 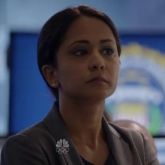 Meera and Harold hiding before they get caught.

Meera and the rest of the task force captured by Anslo's men.

Meera Malik with her son (left) and daughter (right).