The Blacklist Wiki
Register
Don't have an account?
Sign In
Advertisement
in: Season 1 Cast, Season 2 Cast, Season 3 Cast,
and 5 more

Megan Boone is an American actress playing the role of FBI profiler Elizabeth Keen on NBC's The Blacklist.

Boone was born in Petoskey, Michigan, on April 29, 1983. While she was born in Michigan, she was raised in a retirement community in Florida called The Villages. Her parents had relocated there to be closer to her grandparents. Her grandfather, Gary Morse, was developer for the community, and her mother, Jennifer Parr, was the director of sales. She graduated from Florida State University's School of Theatre with a BFA in acting.

Her works include roles in films such as My Bloody Valentine 3D in 2009, Sex and the City 2 in 2010, Step Up Revolution in 2012 and, most recently, Welcome to the Jungle in 2013. She has been in shows such as Cold Case, Blue Bloods, Law & Order: Los Angeles and The Blacklist.

My Bloody Valentine 3D acted as Boone's debut in feature films, with her role of Sheriff Palmer's mistress. She worked with award-winning actresses such as Sarah Jessica Parker and Cynthia Nixon in Sex and the City 2 and had the role of Deputy DA Lauren Stanton from NBC's Law & Order: Los Angeles, which she played from 2010 to 2011, when the show was cancelled. Her performance in the indie drama Leave Me Like You Found Me earned her the Best Actress award in the 2012 Gen Art Film Festival. She had a recurring role as Detective Candice McElroy on the CBS police drama series Blue Bloods in 2013. 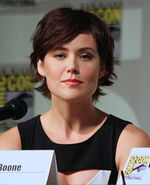