The Blacklist Wiki
Register
Don't have an account?
Sign In
Advertisement
in: Employed by Cabal, Employed by Milos Kirchoff, Criminals,
and 5 more

Edit
watch 02:07
Who is Milos Kirchoff?
Do you like this video?
Play Sound

Milos Kirchoff was a member of The Blacklist.

By his own account in “Berlin: Conclusion”, Kirchoff started out in the Red Army, rose to the rank of Colonel and later became a member of the KGB. Notorious for sending his enemies to the gulags in Siberia, he was a loyal servant of the Soviet Union. In 1991, near the end of the Cold War, Kirchoff took part in a meeting in Kursk with other Soviet officials on how to combat their more progressive countrymen who wanted the Soviet Union dissolved. The meeting was interrupted when a bomb went off, killing 15 attendants and the last of the old Soviet resistance. The act was done by Kiryl Morozov, a KGB operative, on the orders of Alan Fitch, known as ”the Decembrist”, but Reddington was blamed. Shortly after that, Zoe D'Antonio was suspected of falling in love with a dissident and imprisoned. Kirchoff used his connections to help her escape, but the Kremlin found out and decided to use him as an example to the Motherland.

He was put in a Siberian gulag where a lot of people he had put away were imprisoned. One day he received a pocket watch he had given his daughter. Over several months, he was sent several body parts and was led to believe that they were hers and that Reddington was behind it. In reality, Fitch sent body parts belonging to someone else and helped Kirchoff's daughter escape to the United States and change her identity. Eventually, Kirchoff sharpened one of the bones he had received into a weapon, killed the people holding him captive, and escaped and formed his criminal syndicate under the alias ”Berlin”.

Kirchoff is first named (by his alias) when Red, Liz, and Dembe interrogate Craig Keen, Tom Keen's false brother. After hearing Tom state on the speakerphone that he is accountable to “Berlin” for failure, Red asks Craig if the bank is in Berlin, Germany. When he refuses to answer, Red orders Dembe to take him to the car, but before they can leave with him, he jumps out of a window.

He is first seen in the episode on a plane.

He changed clothes with the deceased prison guard and cut off his own left hand since it was tattooed and it could be used to identify him. After the plane crash, he was taken to a hospital to receive medical care. When agents Keen and Ressler come to question him, they believe him to be the surviving prison guard. He tells them his story, but doesn't let them know his true identity.

When he is last seen, he has had his missing hand replaced with a prosthetic hand.

He hires Lord Baltimore to capture Reddington's ex-wife Naomi Hyland so he can use her as revenge against Reddington. He sends Reddington one of her fingers and threatens to send Naomi back to him piece by piece, just like Reddington did with Milos's daughter.

He agrees to Reddington's proposal of the return of the money that was stolen from him in for returning Naomi unharmed.

After being reunited with Zoe, Milos learns the truth of Red's innocence. He kills Kiryl Morozov after learning of Fitch's orders to frame Red and use Milos as a pawn. He is furious with Alan Fitch for lying about his daughter's death and orders his agents to abduct Fitch and strap a pipe bomb on him, intending to kill him. Using Zoe to gain the access numbers to free Fitch, Red holds Milos at gunpoint. Red returns to the warehouse where he is holding Milos prisoner with a bottle of vodka and places 2 shot glasses in front of Milos. After they reminisce about the Cold War and finish the bottle, Red kills Milos.

Milos‘s corpse is identified as one of those taken to the ice rink by Kathryn Nemec. 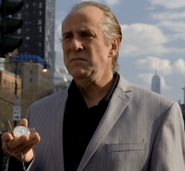