“Miss Rebecca Thrall” is the third episode of Season 5 of The Blacklist and the ninety-second episode overall.

While the Task Force investigates a series of suspicious police shootings, Agent Ressler is distracted by increasing external pressures. With his back up against the wall, Red drafts Tom in executing an elaborate plan to help re-establish his criminal reputation. 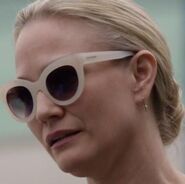