“Nicholas T. Moore” is the twentieth episode of Season 5 of The Blacklist and the hundred and ninth episode overall.

The mysterious appearance of an unidentified young girl sends Liz and the Task Force on a hunt to discover her connection to the secret Red is hiding. However, when her family steps in to protect their own secrets, the investigation turns into a race to save the little girl's life.

Number on The Blacklist[edit | edit source]

Slanders on the FBI[edit | edit source] 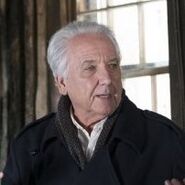 Retrieved from "https://the-blacklist.fandom.com/wiki/Nicholas_T._Moore?oldid=45389"
Community content is available under CC-BY-SA unless otherwise noted.