A man meets with Newton Phillips outside the FBI building in New York City (One Federal Plaza), takes a briefcase from him and walks into the building where he asks for Assistant Director, Harold Cooper. He announces his name is Raymond Reddington, and while the security personnel runs his name, he gains attention as he goes through the odd process of removing his coat, jacket and hat. The guard learns from the computer that Reddington has been listed as an “arrest on sight” fugitive. An alarm is triggered and Reddington immediately, goes into submission and with the alarms ringing, he kneels down on the Federal Seal on the floor, with his hands behind his head and waits. He is instantly surrounded by armed security, guns aimed and at highest alert. The camera focuses in on the Fugitive List where he is featured. He is revealed to be on the FBI Ten Most Wanted Fugitives list.

Things happen quickly once this takes place and it we jump to a scene with Cooper arriving meeting with Agent Donald Ressler. Cooper asks if it's really Reddington as they make their way into a facility. Ressler says Reddington came with documents and so forth, and other proof showing it is him. He also mentions his personal relationship with Reddington having tried to kill him years prior. When Cooper arrives, Red is in an isolation cell and has said nothing. Once it is confirmed it truly is Raymond Reddington, Cooper orders that an Alpha Chip, tracking device is injected into his arm. Red presumes that someone who can make decisions has arrived with this action. He begins to speak in a condescending manner, albeit polite and well spoken, yet still demeaning towards Cooper. He says he can smell the stench of his cologne. He speaks about a specific person he is willing to give to the FBI, one Ranko Zamani. Cooper and Donald Ressler who have been monitoring the conversation check records and determine that Ranko Zamani died 6 years ago. Red replies that a dead man stepped off a plane at 10:30 AM this morning. Checking airport security tapes reveal that Red is correct. Cooper, acquiesces and admits they were wrong about Ranko being dead. This satisfies Red. He tells them he will help the FBI with Zamani as currently, their interests are aligned. One caveat, to which Cooper responds Red has no bargaining power, which Red quickly corrects and further after revealing it was he who helped Ranko get into the country and he has plans for an attack it becomes clear they will have to deal with Red on his terms. For now, he has but one demand. Red states that he will only speak to Elizabeth Keen. Donald Ressler asks “who is Elizabeth Keen?”

The scene switches, a couple asleep in a bed, Elizabeth and her husband Tom Keen are woken by their dog, Hudson, having overslept. The clock, blinking over and over, apparently the power had went out at some point. Liz jumps out of bed and starts rushing around, it's her first day at work for the FBI. Tom, hazy, slowly raises out of bed offering to help. While they are preparing for work they agree to meet at lunchtime to attend an adoption agency interview. Tom shows Liz a flyer for the Washington Zoo. He is trying to decide where to take his students on a field trip. Liz tells him the Zoo is more gender neutral.

As they leave the house, 2 FBI Tahoes and a helicopter arrive outside the house and Liz is taken to the Post Office to meet with Cooper. Liz meets Cooper. He is the Assistant Director of Counter Intelligence, she responds by telling him she knows exactly who he is. They sit along with Donald Ressler and a couple other people. The point of this conversation is to come to some understanding as to why Reddingtong would even ask for her and more pointedly, who is she and Cooper even goes as far as to ask her to profile herself. She eventually breaks into a quiet state, and focuses, telling Cooper the people she worked with in New York at her previous job with the Mobile Psych Unit all thought of her as a “bitch”, called her sir. She says because of mainly raising herself as a kid, she internalized much and furthermore has a deep yearning to understand the criminal mind. He interviews her as to why Red will only talk to her. She answers she can only presume he thinks because she is new he will be able to manipulate her and to this she responds he doesn't know her very well. Liz is then taken to meet Red.

Red greets Liz and tells her about her background and that Beth Ryker, the daughter of general Daniel Ryker, is going to be kidnapped by Ranko Zamani in under an hour.

An armed team led by Liz and Ressler rush to meet the General, and find the location of his daughter. Liz and the team then head to a ballet school where Beth is taken out of her class.

Beth is in a minivan with Liz in an FBI convoy and Liz tries to keep Beth calm. Liz gives Beth a Stars and Stripes pin, and Beth reciprocates by giving Liz her bracelet. The convoy is stopped on a bridge over the river by HAZMAT personnel advising them of chemical spill ahead. while the vehicles are turning round they are ambushed and Beth is taken after a gunfight in which Ressler saves Liz's life. Liz promises to rescue her.

Back at the Post Office where Red is being held, Liz question Red about the abduction, and Red questions Liz about the scar on her wrist. Red says that to get Beth back he will need to see what information they currently have. When he is taken to the operations room, he identifies 2 more members of the conspiracy as the “Chemist” and the “Banker”. Red states that the Chemist makes chemical weapons. For much improved conditions Red offers to find the Chemist. He explains that in order to gather the information he will need to be apparently free.

Red says that the Innkeeper, a man who runs a safehouse network, will know the location of the Chemist.

Red is installed in his favourite hotel. The Innkeeper is arrested and Jennifer Palmer demands to know where the Chemist is located. We then see a FBI SWAT team silently storm the lab and arrest the Chemist, along with his assistants. At the hotel, Ressler tells Liz that the Chemist and his lab were located. Liz decides to return home.

When Liz returns home, she finds some balloons and a card stating “it's a girl” with Tom sitting in a chair facing away from the door. She walks past him and pours herself a glass of wine. When she turns round she sees that Tom is tied to the floor, gagged and has been tortured. Zamani appears from the shadows and asks her what she knows about his plan with the General's daughter. She tells him all she knows, and he thanks her for the arrest of the Chemist as this means that he will not have to pay him. He then stabs Tom in the leg and the stomach, telling Liz that she can save many Americans by stopping him now or let Zamani go and just one; her husband. Liz tries to stop Tom's bleeding and calls 911.

Once she has seen Tom safely into hospital, she storms into Red's hotel room and questions him about Zamani's visit. Red is not forthcoming with information and questions her in return about what Zamani said. Exasperated Liz stabs Red in the neck with a pen and he passes out.

After Red is taken to hospital, Liz arrives at his room door and even though she is on suspension is allowed into his room where she discovers that he has escaped.

Red meets with Zamani and they reminisce about old times. During the conversation it's made clear that Red is behind Zamani's attack on Tom. Meanwhile the FBI have instituted a manhunt for Red led by Ressler.

Red calls Liz and during the conversation she realizes that the target for Zamani's bomb is the Washington Zoo.

Ressler follows Red's chip signal, and corners his man on the roof of the Newseum. When he turns round it's Zamani, as he withdraws something from his pocket Ressler shoots him and he falls to his death. The item he was withdrawing from his pocket turns out to be a pill bottle containing Red's tracking chip.

At the zoo, Liz finds Beth sitting on a bench wearing a backpack containing a bomb. Red calls her and says that he's sent someone to help as the bomb squad won't get there in time. A Ukrainian man arrives, defuses the bomb, then runs away with it. Red walks up and is recaptured. Beth is reunited with her father.

Red attends another meeting with Cooper and Ressler where he says that Zamani was a small fish. Red, as Captain Ahab, will help the FBI hunt the whales. He does, however, have conditions: he negotiates his own immunity deal; he chooses his own security detail; his tracking chip is to be a superior version approved by DARPA; and (of course) he will only talk to Elizabeth Keen.

When Liz arrives home she starts cleaning the blood of the carpet, but it has soaked through, so she takes up the carpet. Under the carpet she finds a storage area containing a box. In the box she finds a large amount of money, several passports in different names with Tom's picture and a gun.

Ex-government agent and one of the FBI’s Most Wanted fugitives, Raymond “Red” Reddington mysteriously turns himself in to the FBI and offers to give up everyone he has ever worked with including a long-thought-dead terrorist but under one condition – he’ll only talk to newly-minted female FBI profiler, Elizabeth Keen with whom he seemingly has no connection. For Liz, it’s going to be one hell of a first day on the job and what follows is a twisting series of events as the race to stop a terrorist begins. 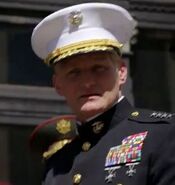 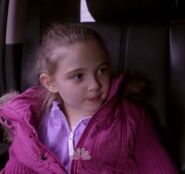 Elizabeth Keen's scar on her hand 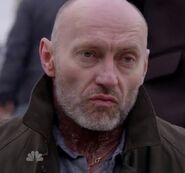