Edit
watch 00:47
Who is Reven Wright?
Do you like this video?
Play Sound

“Kings of the Highway”

Reven Wright was a a character in NBC's The Blacklist

She appears as Diane Fowler's replacement.

She demands to know why Raymond Reddington has not learned anything about Milos Kirchoff despite spending 12,000,000 dollars. She is further annoyed when Walter Gary Martin tells her that Red will only talk to Elizabeth Keen.

She refuses to aid Cooper in the hunt for Milos Kirchoff. She stated that Kiryl Morozov was too powerful to question.

She refuses to aid Cooper in searching the Kenyon compound due to the disasters at Ruby Ridge and the Waco siege.

Reven tells Ressler that her position is shaky.

She orders Ressler to work with Peter Kotsiopulos after Laurel Hitchin’s presidential commission.

“Kings of the Highway”[]

Ressler informs Reven that he believes that Cooper is running an operation with Tom Keen to help Elizabeth. Reven promises to ask Laurel Hitchin more about Matias Solomon and orders Ressler to find out what Cooper is doing with Tom Keen.

Later, Ressler asks if Reven has anything on Solomon yet but she doesn't. Ressler reveals that Samar Navabi has been helping Keen which he had fired Samar for. Reven acknowledges that it's her call whether or not to prosecute Cooper and Samar, but suggests being a little flexible. Ressler explains to Reven that Tommy Markin had used to tell his father the same thing before he set Ressler's father up to be killed when he refused to go on the payroll. Tommy was protected by the other dirty cops and Ressler is adamant that since his father died for his principles, it would be betraying him if Ressler compromises his own. Reluctantly, Reven agrees and leaves.

Reven subsequently visits Hitchin at home and questions her about her connection to Solomon and the African operation that he was a part of. Hitchin asks if this was Ressler's idea, but Reven states that she hasn't told Ressler yet and she came to Hitchin as soon as she found out. Hitchin suddenly draws a gun from her nightstand and shoots Reven in the chest. Caressing Reven's face, Hitchin claims that she's really going to miss Reven and asks for any last words. Reven tells Hitchin ”Tommy Markin” before dying. Hitchin then has a team in Hazmat suits sent by Mitchell Hatley wrap up and remove Reven's body.

After the arrest of Elizabeth Keen, Ressler attempts to call Reven, only to learn that no one has heard from her since the night before. Later, while talking with Ressler, Laurel Hitchin tells him that the last time she spoke to Reven, Reven had mentioned her associate Tommy Markin and suggests that Tommy had something to do with her disappearance. Stunned, Ressler lies that the name means nothing to him, but he privately tells Aram Mojtabai that Reven isn't coming back and that Hitchin works for the Cabal. Ressler explains that he had only mentioned Tommy to Reven only for Hitchin to inquire about him.

When Cynthia Panabaker prepares to transfer Keen, she refuses to do so without Ressler to oversee the transfer, having consulted with Reven before she drafted the transfer order. Ressler arrives to take Keen and informs Hitchin that he knows that she murdered Reven, promising that it isn't over.

Reddington leads Ressler to Mitchell Hatley, the fixer hired by Laurel Hitchin to cover up Reven's murder. Hatley leads Reddington and Ressler to Reven's body which is discovered in a barrel preserved with formaldehyde. An autopsy performed on Reven's body recovers the bullet that killed her which Ressler and Reddington threaten to have matched to Hitchin's gun in order to blackmail her into dismissing the grand jury investigation. In return, Hitchin demands that Ressler agree to never mention her and Reven Wright in the same sentence ever again, something that he only reluctantly agrees to.

Later, Hitchin reinstates Ressler as an agent, but an argument ensues in which Ressler accidentally kills Hitchin due to Laurel attempting to blackmail Ressler. 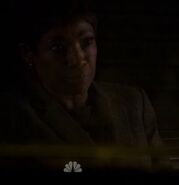