“Roanoke” is the first episode of season 8 of The Blacklist and the hundred and fifty-third overall.

Slanders on the FBI and police[] 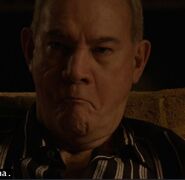