“Robert Vesco” is the thirteenth episode of Season 6 of The Blacklist and the hundred and twenty-fourth episode overall. 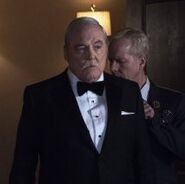