The Blacklist Wiki
Register
Don't have an account?
Sign In
Advertisement
in: Employed by Cabal, Criminals, Season 1 Characters,
and 4 more

Stanley R. Kornish was a body disposer who first appeared in “The Stewmaker”.

A dentist by trade, Stanley R. Kornish had a separate career as a professional body disposal expert. Working for whoever could afford his services, including terrorists, criminal syndicates, and rogue governments, he used his expert knowledge of chemicals to dissolve corpses until there was almost nothing left. He kept a photo of and a tooth from each victim as a souvenir. Many of his disposals were done at a cabin he owned. His dog accompanied him on his disposals.

Kornish is first seen disposing of the body of an eyewitness against Hector Lorca, a drug lord. He covers his motel room in plastic, wipes down the room, and proceeds to dissolve the body with chemicals.

He later brings Elizabeth Keen in order to dispose of her as well. Kornish sees this as his “evolution”, instead of merely disposing of bodies, he is now making bodies of his own by killing. He injects Liz with a paralyzing drug and begins to prepare for her chemical death. After Liz breaks free, he and his dog track her down in the woods and Liz is dragged back to the cabin.

Kornish is stopped by Raymond Reddington, who tells him about a farmer who lost everything he held most dear: his crops, his animals, his family. The farmer then ran away from his former life, only to become the very thing that destroyed his life. The farmer had become the one who burns, the one who slaughters. And he must pay. Despite Liz's pleas to let Kornish live, Red shoves him into his chemical bath, killing him with his own profession.

Raymond Reddington tells Milos Kirchoff how he he stole from Stanley R. Kornish's photo book of his victims a photograph of Zoe D'Antonio. He explains that Zoe was brought to Kornish to make her disappear. 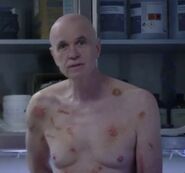