Tatiana Petrova is a former KGB spy and Cabal operative and a member of The Blacklist.

Tatiana Petrova was a spy and KGB agent that worked under orders of Dominic Wilkinson during the final days of the Soviet Union. She worked alongside another KGB agent operating under Dom's supervision, Ilya Koslov, who was a friend of hers as the 2 spies fulfilled several assignments together. Following Katarina Rostova's disappearance and the issue of the Townsend Directive to kill her, Dominic Wilkinson tasked Tatiana to pose as Katarina Rostova and go to Belgrade. However this was setup as Dom, alongside Illya planned to assassinate Tatiana while she was serving as a decoy to Katarina in order to fake the latter's death and make all the people hunting down Katarina Rostova end their search, therefore keeping the real Katarina safe. Dom's plan failed and the car bomb they intended to kill Tatiana, killed her husband instead. Regardless, Dom's plot did work in the sense that following the failed assassination attempt, the entire world believed Tatiana Petrova to actually be Katarina Rostova, forcing her to become a fugitive with the Townsend Directive on/over her head. Years later, Raymond Reddington found out what Dom and Illya did to Tatiana and reached out to her in order to help Tatiana, to fund her life in hiding.

Katarina is revealed to be alive and Red travels to Paris to warn her of the assassination attempt on her life. Before he can continue, she kisses him and stabs him in the stomach with a syringe and Red is taken away in a van.

Liz finds Katarina’s file amongst those of the Orion Relocation Services and puts together who she really is based on the events surrounding her nanny and various comments Katarina has made to her. Liz confronts her mother in her apartment with a gun and Katarina drops the act when Liz reveals she knows who Katarina really is and what she has done. Liz threatens to kill Katarina for all of the pain she has caused and asks for 1 good reason not to. Katarina reminds Liz that she is Liz’s mother as Liz struggles with whether or not to pull the trigger.

Liz learns from Katarina that Dom lied to her about Red’s true identity. The real Illya later tells Red that he didn’t tell Katarina the truth. Red later brings word to Liz that Katarina was gunned down by two agents in the middle of the street who took her body to collect the bounty on her head, but Katarina calls Liz to reveal that she faked her death. Katarina states that she now needs to lay low for awhile, but promises to return some day soon to finish what she started. Liz promises to keep her mother’s secret and tells Katarina to stay safe.

Her voicemail recording is heard. 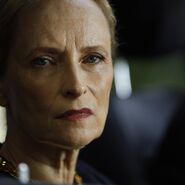