Teddy Brimley is an interrogator.

Teddy Brimley is a professional interrogator that has been working for Raymond Reddington for 19 years, extracting crucial information from key individuals for Red through the use of several unique and unconventional torture methods. Brimley's most distinctive trait is that he uses an oxygen cylinder because he suffers from several medical conditions, including hypoxemia, congestive heart failure, diabetes, and asthma. Brimley was arrested and served a prison sentence in Lompoc, California. Teddy also possesses several animals which he uses in his work, including a snake, a llama, and a badger.

Brimley is first introduced as the man who just finished interrogating Meera Malik for her role in the attack on the Post Office. Brimley tells Reddington that while she may be a mole, she is clean, indicating someone else used her to get the information to Anslo Garrick.

Brimley exits the room of a man hung upside down who is screaming in pain, telling Reddington he probably doesn't know anything. Reddington isn't convinced, so Brimley continues to torture him while asking for more supplies to continue his work. Reddington tells Elizabeth that the man is a Cabal operative working as an aide to the Russian consulate who gave Karakurt money upon entering the country. Reddington is eventually proven right: Brimley gets Karakurt's address from the aide and gives it to Reddington. 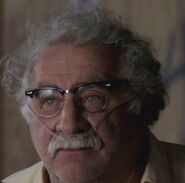 Retrieved from "https://the-blacklist.fandom.com/wiki/Teddy_Brimley?oldid=43181"
Community content is available under CC-BY-SA unless otherwise noted.