For the character of the same name, see Eric Trettel.

Raymond Reddington is at Elizabeth Keen's house and tells her that he thinks they should next find a person on The Blacklist known as the Alchemist. According to Red, he has killed men, women, children, and infants to protect the guilty by killing the innocent. Red says that he has learned he has been hired to protect Pytor Madrczyk, a mob informant and his wife. Red also says that he is called the Alchemist because he relies on science to transform one person into another.

Eric Trettel is in a motel room with a blonde woman and they are starting to make out when she falls unconscious. When she awakens, she has dark brown hair and is on a jet aircraft sitting opposite a man whose passport identifies him as Pytor Madrczyk. On the floor is a dead woman. When the blonde woman questions the man, he complains about his teeth, looks at his tattooed arms and says he does not have tattoos, is not called Peter, and does not have a passport. Just then, Eric, in skydiving gear, exits the cockpit, opens the door and jumps out. In the cockpit there are 2 bodies in the pilot's seats. The aircraft then crashes.

Meera Malik tells the team that the people on the plane have been identified as Pytor and Catherine Madrcyzk. When Harold Cooper says that Red said they would disappear and now they are burned beyond recognition, and asks Liz for his explanation and tells her to bring him to the Post Office, she replies that he will only meet off site as he thinks there is another mole. Cooper says that the Department of Justice is satisfied, but tells her to meet Red.

Red is meeting with a "Wikileaks" style hacktivist who is hunting the mole. They have a large amount of shredded government documents procured from a company with the contract for shredding government documents. Red tells them to re-assemble the documents. When the activist refuses, due to the sheer amount of paper, Red reminds him that he is bankrolling Julian's operation while he is trapped in the embassy.

Liz meets Red in a synagogue, where he tells her that the medical examiner is wrong, as the Alchemist can change DNA and dental records. He also tells her that because Pytor Madrczyk nearly hired him to aid in the disappearance, he knows where they can find Pytor Madrczyk.

Liz, Donald Ressler, and Meera Malik arrest Pytor Madrczyk in a bar in Budapest, Hungary. While waiting for Pytor Madrczyk, Ressler tells Liz that he has heard from his ex-fiancée Audrey Bidwell and that she wants to have a meeting.

When Liz returns home, Tom Keen tells her that he went to Nebraska, but did not attend the interview. He also reminds her that they are hosting a "baby shower" that evening.

Back at the Post Office, improved medical checks show that the male crash victim's teeth had been altered so that they matched those of Pytor Madrczyk. Liz meets Red again and he tells her that he has heard rumors about the Alchemist using synthetic DNA and blood substitutes as part of his procedure.

Liz brings back a list of people that Red claims were helped by the Alchemist. While she is briefing the others, Aram Mojtabai tells them that he knows the identity of the woman on the plane, Sarah Jenkins, and that the last time she was online she accessed a dating site. Aram is in the process of getting a warrant for the site's records.

Trettel meets with Catherine Madrcyzk, and after learning the name of her husband's lawyer, shoots her and wraps her body in plastic.

Ressler is interrogating Pytor Madrczyk, reminding him that he broke an FBI immunity deal. Ressler offers a new deal in exchange for information on The Alchemist. Pretending to be his lawyer, Trettel interrupts Ressler's questioning of Pytor Madrczyk, and once Ressler has left the room poisons him with nicotine gum.

Liz shows Ressler a photograph of Sarah Jenkins' contact on the dating site and Ressler recognizes him as the person claiming to be Pytor Madrczyk's lawyer and rushes back to the conference room where Pytor Madrczyk was meeting his lawyer. He is too late, Pytor Madrczyk is dead and the lawyer has disappeared.

Meera manages to discover that the person that they are looking for is Eric Trettel, a failed medical student who used to work on the Human Genome Project, and then as an expert DNA witness. Six years ago he tried to present false exculpatory evidence in a Mafia trial, but was exposed as a fraud and disappeared. He left behind a wife and young daughter. He was traced to a car rental office.

While Ressler looks for the car, Liz interviews his wife, Molly, and learns that Trettel has not lived with her since the trial, but regularly visits much to her chagrin. Liz also learns that Trettel's daughter, Annie, has recently been diagnosed with diabetes. Ressler and Meera find the car, burnt out with the body of Catherine Madryczk in the trunk/boot.

With prompting from Red, Liz and Ressler start to trace a sequence of numbers on a torn/burnt piece of paper found in the car, to see if the numbers relate to DNA sequencing laboratory equipment.

Trettel arranges to meet an actress, called Mandy, who he takes to his lab for alteration.

A woman finishes reading a file on Tom Keen, then looks in a mirror and says, "I'm Jolene, nice to meet you".

At the baby shower Liz and Tom argue about the fact that Liz is not taking any time off from work. They are interrupted by Jolene, who tells them that she is a substitute teacher. Liz receives a call from work and leaves. Jolene starts to talk to Tom and invites him to a photography exhibition the following night.

Meera is able to trace the numbers to a centrifuge, but when they raid the lab, it is empty. Ressler realizes that Trettel is killing everybody who could lead the FBI to him. They rush to Molly Trettel's house only to find the dead bodies of Molly and Annie.

Next day, Liz arranges a date that evening with Tom. Aram puts some of the pictures of Trettel's victims on screen and Liz realizes that one of the women looks like Molly. She puts out an AMBER Alert on Annie Trettel after realizing that he has taken his wife and child. Red is with his document reconstruction team and is shown a memo signed by Meera Malik just as Liz calls for advice. Red recommends tracing Molly and Annie, not Eric. There is not enough time for Red to trace the new identity that Eric will create. Liz traces Annie's insulin pump to a location 70 miles away.

Trettel is in a filling station/convenience store when the AMBER Alert appears on the TV. A random citizen pulls out a gun and a firefight ensues. The daughter is hit with a bullet and severely wounded. The store is surrounded by a police SWAT team, who are going to kill Trettel to rescue the hostages. Keen and Ressler arrive and inform the SWAT commander of the FBI's need to take Trettel alive. Keen ignores the SWAT commander's order and negotiates with Trettel. Eric requests a medic and demands immunity and witness protection for himself. He offers the names of all his clients in return. His wife shoots him when he stalls on the medic, and a police SWAT sniper finishes the job.

Liz calls Tom to tell him she will be late, Tom throws the meal he has prepared in the garbage, then goes to the exhibition with Jolene.

Ressler goes to meet Audrey, having decided to advise her not to marry her fiance, but when he arrives he tells her that they make a great couple only for Audrey to say that the relationship is on hold because she can't stop thinking about him. They leave the restaurant arm-in-arm.

Aram manages to print a full list of Trettel's clients, which Liz gives to Red. Red puts the list in his pocket and Liz accuses him of looking for someone on Trettel's list. Red says that he has business to attend to, and leaves.

THE NEXT TARGET ON THE BLACKLIST IS A MAN WHO PROTECTS THE GUILTY BY PREYING ON THE INNOCENT – Red informs the team that "The Alchemist"  - a man who relies upon science to transform a person’s DNA - has been contracted to protect a well-known mob informant and his wife. As the team goes undercover to catch him, Liz finds herself on the hunt for an unlikely couple. Meanwhile Liz and Tom find themselves at another bump in their relationship and Ressler debates whether or not he should give his ex-girlfriend his blessing.

Slanders on the FBI and United States governmentEdit 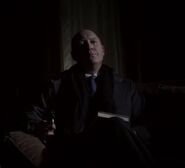 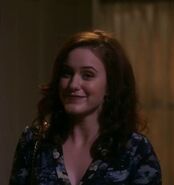 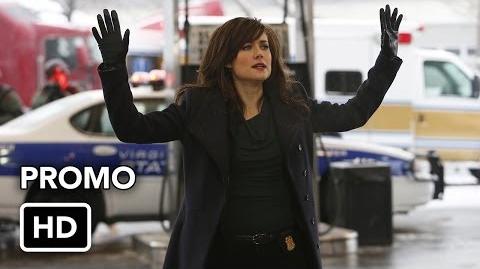 Retrieved from "https://the-blacklist.fandom.com/wiki/The_Alchemist?oldid=41079"
Community content is available under CC-BY-SA unless otherwise noted.