“The Brockton College Killer” is the eighteenth episode of Season 6 of The Blacklist and the hundred and twenty-ninth episode overall.

When a frozen corpse is discovered in the woods, the Task Force is drawn into the investigation of an old case that has gained notoriety due to a popular true crime podcast. Meanwhile, Red visits Dom Wilkinson for help making a difficult decision, and Ressler makes a discovery about Katarina Rostova’s past. 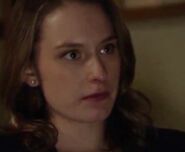