“The Cook” is the twelfth episode of Season 5 of The Blacklist and the one hundred and one episode overall.

Arsons are being committed by the Cook. Red recommends convicted arsonist, Earl Fagan, to assist in return, the team must help him with parole.

In the meantime, Liz goes to Red for help on the glass eye. Red gives her a terrarium of Japanese Joro spiders to drop off at Mariko Ito's office as a gift.

As Liz works with Red to hunt for Tom's killers, she begins to question his motives. Meanwhile, the Task Force enlists the help of one arsonist to catch another. 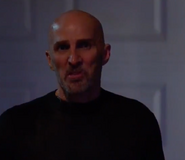