For the character of the same name, see Tommy Phelps.

Elizabeth Keen and Tom Keen are in bed when she asks him about the Angel Station hotel. He then attacks her and tells her that the people he works for are very powerful, then she wakes up.

While they are getting ready for work Tom tells Liz that their surrogate is due to have a scan that day.

A disguised man stops behind a pick-up truck and checks the bay to find a bound captive inside. He takes the captive to a remote spot and takes proof-of-life video. then buries the man in box with an oxygen supply. During this, the captive stabs him in the chest, but his captor is barely affected by it, and his only reaction is to look at the captive in surprise.

Newton Phillips brings Raymond Reddington his morning cup of tea and mentions that the shipment is underway. Red orders an intercept, but Newton Phillips states that Tommy Phelps was hired. Red remembers that in Cairo several of his men were killed. He tells Newton Phillips that the FBI will be used as the strike force.

Red speaks to Liz about how criminals, who know they can not trust one another, are able to do business with each other by replacing that trust with “fear and the threat of violence”. Red goes on to say that the next name on the Blacklist, the Courier, embodies both of these things.

Red explains that the Courier's involvement in a transaction almost ensures success and that he is “the perfect middleman for an imperfect world”. Once involved in a transaction, the Courier can neither be bribed nor stopped; if either party involved tries to double cross the other, he kills them both.

Liz is initially skeptical that Harold Cooper will sanction a black operation against “the UPS driver of crime”; but when Red mentions that the amount involved is 20,000,000 dollars, Cooper sanctions the operation.

Liz and Meera Malik trail an Iranian agent named Hamid Souroush to the contact location, the Winston Farmer's Market.  At the market the surveillance team lead by Donald Ressler notice that Souroush has been given a phone and uses it to make contact. Souroush approaches a stall and speaks to the stall holder, who ducks into a tent, then shoots him in the head. Liz and Meera give chase, as the stall holder flees in his vehicle. Meera (presumably because of her CIA training) is able to cause the 2 vehicles to crash, and they pursue him on foot. While hidden from Liz and Meera he inserts a memory card into a fresh cut on his chest. Liz and Meera corner him, and instruct him to raise his arms. He seems to reset his right shoulder before using his left arm to raise the right one.

Back at the Post Office, after a failed interrogation, it is discovered the the Courier is unable to feel pain due to the genetic disease of congenital insensitivity to pain with anhidrosis. A medical scan reveals several objects implanted in his body. Investigation of the most recent cut reveals the memory card.

The FBI review the memory card, and discover that the captive is Seth Nelson, an NSA programmer who works on the most secure computer systems.

Cooper then orders a full body scan, and for Phelps to be transported to a hospital for the removal of the objects.

Red is able to provide the location of Phelp's safe house, and when the FBI search the place they find surveillance photographs of both Soroush and Laurence Dechambou, a former French intelligence agent now working as an information broker.

From the artifacts retrieved from the safehouse, the agents identify the Courier as Tommy Phelps, and discover that he has a younger brother who is serving 15 years in Petersburg state prison for armed robbery. They have him brought to the Post Office for questioning. He is unable to reveal anything about his brother's current activities, but relates a story from their childhood where their father would stage fights between a dog and Tommy.

At Liz's suggestion Ressler goes to Dechambou's nightclub impersonating the courier to try and discover where she left Seth for Phelps to collect. The ruse is unsuccessful, since Dechambou knows that Phelps would have killed her if the deal had gone bad. Ressler survives the ensuing shoot out. Dechambou attempts to escape, but is arrested by a SWAT team and taken to the Post office.

Red suggests that the FBI release her, since as a trained intelligence officer, she will tell them nothing. Dechambou can be re-arrested in the future, but time for Nelson is running out. Cooper eventually agrees and when she returns to her club, Red is waiting for her. In return for a flight out of the country she tells Red where she left Seth.

From property records, they trace where Phelps grew up, and Ressler and Meera lead team to the site. While the rest of the team are searching the area and maintaining a perimeter, Ressler and Meera are involved in a shoot out with Phelps. When Ressler enters the dwelling, he realizes that Phelps has left by the rear exit. He and Meera pursue Phelps but just as they reach him he dies.

From the information given to Red by Dechambou and the time stamp on the video, Red and Liz work out that there is only one possible place for Seth to be hidden. They immediately depart for the site with Dembe Zuma driving.

At the site which is a dumping ground for old refrigerators they start searching for Seth, Red realizes that Phelps would have buried Seth and locates a clear area, where they dig and find the imprisoned Seth. When they release Seth they find that he is not breathing, so Dembe starts performing CPR. Once Seth is breathing again, he asks who they are, and Red says that they are the FBI and friends. As Seth is being loaded into the ambulance he and Red have a whispered conversation and Ressler tells Liz that she did a good job.

While Liz is completing her report on the day, she receives a package containing the unredacted report on the Angel Station Hotel murder seen in “Wujing”. The report contains reference to an identified white male, and the accompanying photograph of a man in a baseball cap looks like Tom.

Newton Phillips says to Red that Nelson gave him one question, and he wasted it, when the question “could have made the world tremble” or identified their adversary. Red replies that he is betting on the long term.

Liz visits Red before going home and has been crying. She says to Red that she does not know why she is there. He gives her a drink.

Liz returns home and says to Tom that they need to talk. He says that he was about to say the same thing to her, and shows her the open box.

The watchers are still watching and one says to the other that this should be interesting.

Red finds out that “The Courier” - a middle man that no one crosses - is delivering a package worth millions of dollars to an Iranian spy. Only the Courier is a ghost no one including Red, knows what he looks like. While racing to stop the mysterious criminal transaction, Liz, inadvertently finds herself thrust into a dangerous kidnapping plot. Meanwhile, Ressler must finally accept that Liz is a valuable asset to the team.

Slanders on the FBI and NSA[] 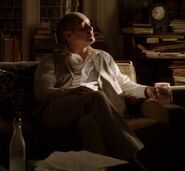 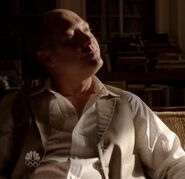 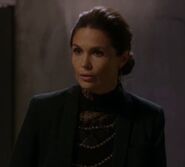 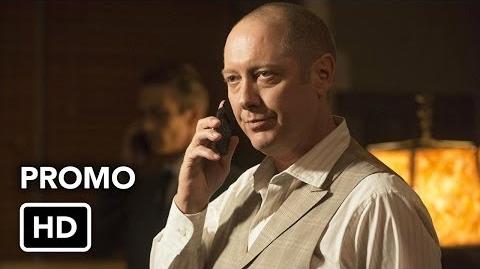