“The Decembrist” is the eighth episode of Season 2 of The Blacklist and the thirtieth episode overall. It aired on November 10, 2014 on NBC.

The episode begins with a flashback to when Elizabeth Keen shot her husband Tom Keen after he tried to kill her. She then tells Raymond Reddington that he should leave the room so she can finish him off; she instead kidnaps him, persuades her friend Ellie to treat him and keeps him prisoner on a boat on the docks, and makes him reveal important details regarding Red's nemesis and former KGB member Milos Kirchoff and several other people on Red's Blacklist. It is revealed that Elizabeth has held Tom captive for 4 months.

Elsewhere, Red meets with Milos Kirchoff and reveals to him that his daughter is in fact alive, and he presents her to him, thus making their feud pointless, as Milos Kirchoff believed that Red killed her. Red asks Zoe who told him the lie; she reveals the person's identity as The Decembrist. Red and Milos Kirchoff hunt down several people in order to find out The Decembrist's true identity. They eventually find a name: Alan Fitch, an associate of Red's. After finding out who it is, Milos Kirchoff decides to hunt him down and kill him, something Red is not keen on doing.

Red later reveals to Elizabeth that he is in fact working with Milos Kirchoff and that he knows that Tom is not dead. This angers her, as she has spent months trying to find him; Red shows disappointment that Elizabeth did not trust him enough to tell him about Tom. Back at the boat, Tom tells Elizabeth that she will not kill him despite her supposed want to. A stranger then happens upon the boat, and Elizabeth captures him. Tom then kills him as a way to remove witnesses; Elizabeth watches in horror as her bodyguard Ronaldo holds her back. Elizabeth then demands to know where Milos Kirchoff is: he says if she lets him go, then he will reveal the information. Elizabeth asks for Donald Ressler's assistance, despite his reluctance. The 2 of them help Tom escape into the city unseen after he reveals Milos Kirchoff's last known whereabouts.

Milos Kirchoff later takes Zoe out to lunch. Zoe is visibly uncomfortable being there, especially with Milos Kirchoff's men keeping watch. Red then drops in and demands to know what Milos Kirchoff's men did to Alan, as he has gone missing. The FBI later find Alan with a bomb strapped around his neck. He is escorted to FBI headquarters and locked in the same box that Red was sent into after first being detained by the FBI in the first episode. There, several bomb squad officers attempt to disable the bomb. Eventually, Alan announces he does not want any more blood on his hands than he has already, and asks the bomb squad officers to leave; they reluctantly do so. Alan then asks for Red before he dies. Red stands outside the box, and Alan asks if he has “The Fulcrum”; Red merely says that he cannot stop the bomb. Alan then says that his death will trigger a series of events, which will make it harder for the moderates to resist the radicals, and predicts that by 2017, conditions will get worse. Alan names 2 members who might be willing to ally with Red. Alan then tells Red the combination to a safe he has hidden away in St. Petersburg, but is unable to tell him the location within the city before the bomb explodes.

Later, Red meets with Milos Kirchoff in a warehouse and the 2 share a bottle of vodka as Milos Kirchoff reminisces of better times during the Cold War, such as the military parades and the Soviet space progam. As Milos Kirchoff finishes the bottle, Red shoots him 4 times, killing him. Elizabeth goes back to the boat where Tom was, and finds Red waiting for her there; he once again reiterates his disappointment in her not trusting him. Elizabeth tells him how frustrated she is that she did not kill him, and Red says that love is still a factor. He then embraces her.

That night, Tom meets Red in a restaurant, and Red gives him an envelope, telling him “You are never to see her again.” Before he leaves, Tom then tells Red that during his captivity, he never told Elizabeth about them, implying that Tom has been working for Red the whole time.

RED GOES AFTER THE NEW THREAT BEHIND BERLIN’S VENGEANCE – Red's motives for Berlin take a sudden turn when he learns Berlin was manipulated by the latest Blacklister to avenge Red. Red and Berlin travel to Moscow to track down a high ranking Russian official who they believe is responsible. Meanwhile, Liz struggles to keep her secret from unraveling. 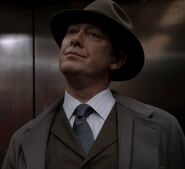