“The Deer Hunter” is the thirteenth episode of Season 2 of The Blacklist and the thirty fifth episode overall. It aired on February 26, 2015 on NBC.

The FBI team tracks down a serial killer nicknamed “The Deer Hunter”, who has been on a killing spree for nearly twelve years. Detective Wilcox continues to question Aleko (Liz' helper on the boat) about the harbormaster's murder, who agrees to testify if he gets immunity. The mysterious caller sets up a meeting with Reddington, telling him that they need to discuss something in person. Red then meets with Elizabeth and inquires about the Fulcrum, which she unsuccessfully lies about. They agree to a deal that he will help bring down The Deer Hunter in exchange for the Fulcrum.

The Deer Hunter turns out to be the murdered husband of Tracy Solobotkin (Amanda Plummer), who is an employee in an organization that helps battered women. Kidnapping Liz, she reveals that she killed her husband in self-defense and decided to continue his legacy in the form of killing men who hurt other women. She claims her husband still “pulls the strings from beyond the grave.” Liz disagrees with her, telling her she is just like her husband, that she enjoys the killing. The two argue. In a move reminiscent of when Tom killed the Harbor Master, Liz manages to choke her into unconsciousness, just as Ressler and the task force arrive. The irony is not lost on Liz, and she tells Ressler she is going to go to Wilcox and tell him everything. Ressler argues with her, and says if she does, the task force will be shut down and all the good work they do will be lost.

Separately, Reddington finds out about Aleko's deal with Wilcox and tells him he will arrange for the Samoan's brother to get a needed heart transplant if Aleko will to lie to the U.S. Attorney and clear Elizabeth. But the only time Red can speak with the Samoan falls at the same exact time as the intended meeting with the mystery caller, so Red sends Dembe instead to take the call, which angers the mystery caller who hangs up during the phone call.

Wilcox interviews Aleko under oath, who says he can't remember. When Wilcox presses him, Aleko said he only told Wilcox what he wanted to hear.

Red later manages to trace the Mystery man's location, but only finds the cell phone he was using and signs of a fight, including blood on the floor. Liz drives to the police station, but doesn't go in. Red meets with her to inform her of his deal with Aleko. Liz confirms that she has the fulcrum, and says she will give it to Red if he tells her what it is. He says he can't. She refuses to give him The Fulcrum. Reddington calls her out for being afraid that he would lose all interest in her if she gave it to him.

When Liz learns of a serial killer known as “The Deer Hunter” who tracks his victims like prey, Red helps the task force search for the killer. Meanwhile, the local DC police suspect the city Harbormaster was murdered as Liz struggles to keep her secret from unraveling. 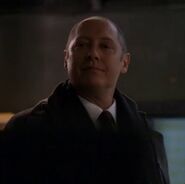